(NOTE: TRIP HOUSE has been re-titled HOUSE OF DEMONS for its February 2018 release)

At the end of last week I got an email from director Patrick Meaney who was the mad genius behind one of the best films of the year NEIL GAIMAN DREAM DANGEROUSLY. He said he had just finished his latest film, a thriller and asked would I like to see it?

"Yes"I replied and the rest is history.

What follows is a far from spoilery review for Mr Meaney's cinematic confection. I don't know if you need to know any more than that  other than  the film is going to be showing up in a theater near you soon and you'll want to have money aside so you too can buy a ticket and take a ride. It is that rarest of films, a great one that get better the more it's pondered.

Thank you to Patrick Meaney for letting me see TRIP HOUSE and for supplying the poster art and stills. 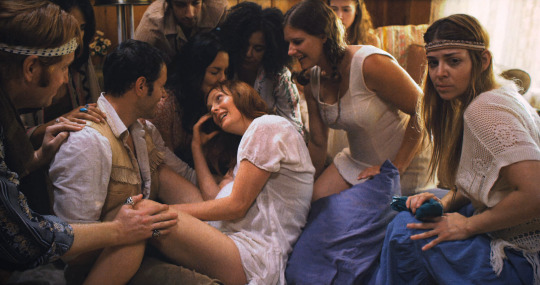 Patrick Meaney's film TRIP HOUSE is a gem. Destined to be called a horror film because that is the easiest thing to call it, it is in fact something more than that. It simply transcends genres and easy description.  I suspect that if the film finds the right audience it will end up a touchstone film for many people for years to come.

Possessing elements of not only horror but fantasy, science fiction and thrillers as well TRIP HOUSE is in fact best described as a Vertigo comic book melded on to a 1970's drive-in movie.  I think the best way to describe it for people who know comics and films is imagine if  Grant Morrison decided to make a film version of  Steven T Seagle's House of Mystery in a style that approximated 1970's drive in films where there is a secluded house some where. (I'm thinking something with the feel of THE EVIL or EQUINOX or WE ARE STILL HERE) If that happened you'd end up with an exploitation style film with very high literary aspirations which is what you have with TRIP HOUSE.

Because the film is hasn't been released I don't want to say much about the plot other than a group of friends go to a house to crash the night before a mutual friend gets married. The past is recalled as the friends talk about their time apart. Things of course happen as there are other forces at work.And if you think you have any idea where this is going you are wrong. Where it goes and how it goes is nowhere near what you'd expect.

I'm not sure where to begin taking about the film. Should I mention the cast which is pretty much great across the board? Every one here is excellent and believable. Other than one awkward performance in a flash back everyone is spot on. These are well rounded characters created by actors who do more than just give line readings to the dialog. There is a physicality to them that makes them more than typical "horror" film characters. 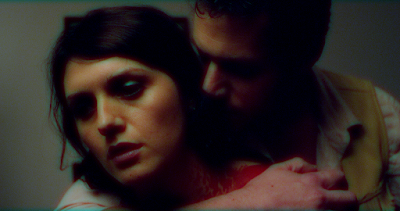 Should I mention the technical achievements which create more than your typical amounts of tension? So much to say about the editing, music, camera works and everything that goes into a film that I'm not sure where to start...worse because of the construction of the film it's hard to really discuss sequences since to do so will give spoilers. I don't want to do that. I will say that the opening two minutes before the credits got my attention and I sat bolt up right just as the title popped on screen.  All I could ponder was wonder what the hell I had gotten myself into since the sequence makes clear that the technical crew have made a very tactile, very visceral film that gets inside you and makes stare at the screen.

Should I talk about the script which uses horror movie tropes and turns them upside down to create what amounts to drama about the the past? While it's clear Patrick Meany is working in the fields harvested by people like Neil Gaiman and especially the aforementioned Grant Morrison, he has marked out a little piece of property of his own. Meaney has taken what he has earned from the master storytellers he's profiled and in a way, uses it against the audience. We expect the story to go a certain, the film is throwing up various tropes left and right, but it isn't  using them the way we expected.

The most obvious way to see that is that Meaney has structured the story like a horror film, but it's not, there is something greater going on. The best example is if you compare what it is to Neil Gaiman's Sandman. Nominally Sandman is a fantasy comic, but the reality is it's ultimately simply a drama about people that uses the fantasy elements to accentuate the discussion of the human issues, which in Sandman would depend on the story arc. Here its about how we deal with our friends and our shared pasts. Are we chained to the past or are we going to move forward unencumbered? Can we even move forward? More importantly is hat we remember correct?

And at the same time TRIP HOUSE reaches into your belly and twists up your insides as things happen that don't bode well for anyone...because despite my insistence that it isn't, the film is very much a horror film, or if not straight on horror, a fantastical thriller. You will forgive me I so want to write about the film but I don't feel it's fair because this is the sort of film you need to discover on it's own. If I knew when the film was going to be out for you to experience I would say more, but I don't want to dangle the film's delights until I know when you'll be able to experience them for yourself.

And I need to really ponder the film, perhaps see it a second time or two, since the film shifted before me as one thing that's promised in the first two minutes before the title to something else after the title to something else once things begin to happen. I was never on solid footing and I was never certain where it was going. That's a good thing,  since it kept me interested and wanting to know how it was all going to play out.

I have to say that this is the best sort of film - one that sticks with you and makes you think about it, not in a "that was good" or "that was scary" sort of way but rather 'I need to think about what the film was doing and trying to say" way. TRIP HOUSE is a film that I and hopefully you too will be pondering for a long time to come.

This film is highly recommend.  A beautiful marriage of genre and literary ideas this is a film that will delight anyone who wants more than hack and slash or blood and guts in their "horror" films. 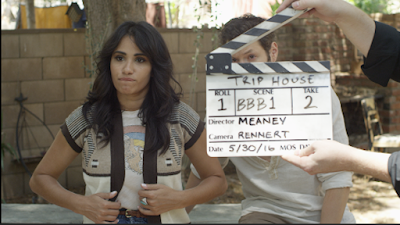