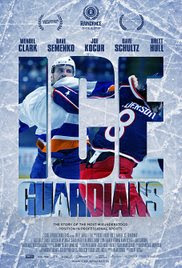 A look at the role of the "enforcer" in professional hockey. The enforcer is the guy whose job it is to fight and to scare the other other team in submission. However with a change in the rules and a move away from fighting the position has been put on the endangered list.

The joke was always I went to  boxing match and a hockey game broke out. Back in the bad old days fighting was a big part of the game with many nights coming to a close with the ice stained red with blood and littered with teeth. I grew up during that time and I while never watched a hockey game with the intention of seeing a fight I did enjoy them when they happened.

Living in a house where my brother  and my dad played hockey I appreciated the role of the enforcer. I liked that someone was going to keep my family safe from the goons on the other side. While admittedly fights in their leagues were few and far between, there were times when they did happen usually they came when someone did something stupid, like laying out my brother in the goal. On the next drop of the puck the offender was taken care of by enforcer.

Understanding the role of enforcer and the game of hockey made seeing ICE GUARDIANS a kind of look back into old time hockey, or at least old time as far as I am concerned. The film beautifully explains the position, who the men who take are/were and how they are now fading away as a drive for more safety takes the lead. The film talks to many of the guys who carried the title enforcer and it really gives one a real sense of what it all was about.

I liked the film, but I'm not sure how the film is going to play for a person who isn't a hockey fan. Running almost two hours the film is probably twenty minutes too long giving a bit too much information for the non-fan. On the other hand if you are a hockey fan this is a must. Its rare that we get to see any sort of hockey film, much less a documentary get an honest to goodness theatrical release so the thought of seeing hockey on a big screen is just too much to pass up.

ICE GUARDIANS will be playing in theaters New York and Denver today and then moves onto L.A, Philly, Detroit, St. Louis, Washington, Detroit, Pittsburgh and Boston in November.