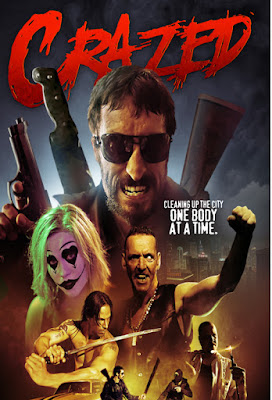 Get your friends, get some beers and get CRAZED a completely over the top, "I can't believe I'm seeing this" movie.

The plot of the film has a cop named Ronan Pierce going after the Luna Cartel and it's leader who killed his daughter and kidnapped his wife. The cartel kidnaps women and takes their organs for transplant. Pierce is a a weird ass mix Punisher and Batman mixed with the witty remarks of Dirty Harry. Pierce wants the top man and he is not going to stop killing everyone and everything in his way until he gets revenge and his wife back.

Violent, brutal, and at times very funny CRAZED has an absolute sense of fun going for it. Its clear that everyone connected to the film loves what they are doing and are on the same wavelength. They are going to entertain us never mind if the budget was small or the script makes no sense. The investment in the characters by the actors carries over and makes the film something just a great deal of fun to watch.

How good is it? After I started it I was like- oh hell I should have been watching this with my dad and brother.

I really like this film in a pure B movie exploitation sort of a way. It ain't high art, hell I'm not even sure it's a good film, but god damn is it entertaining.

I see a great many low budget action films every year. Most you never hear about because most I never finish. Many low budget directors think they know what they are doing when they don't. Here director Kevin McCarthy  takes what he has to work with and turns it into something worth your time and money. CRAZED is exactly that and we are so much better for it.

Currently on digital down load CRAZED hits DVD on 11/8