Joe Bendel on Princess Eun Hwa (short) at KAFFNY 2016. (Plus a discount code for money off KAFFNY screenings) 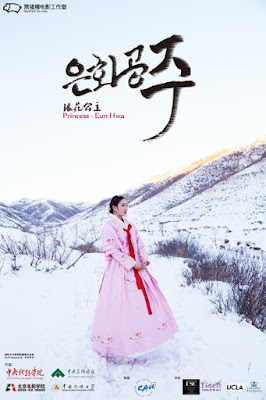 She is the sort of Joseon princess Kurt Vonnegut might have written about—and the Russian, Egyptian, Chinese, and Thai princesses too. She seems to be shifting in time and space, from era to era. However, her secret is only too terrestrial and tragic. Somehow, her mysterious uncle holds the key to her fate in Dave Zhang’s short film Princess Eun Hwa, which screens during KAFFNY Third Culture Cinema 2016.

Poor Princess Eun Hwa adores her uncle, but he always leaves after delivering her medicine. The kingdom appears to be restive, but there is always a brave prince willing to escort her through the chaos in search of her beloved father-figure. However, as soon as she kisses her champion, she is suddenly whisked away to another historical realm. This process continues through most of Asia and the empires of classical antiquity. Whenever the Princess tries to slow down the cosmic cycle, she incurs her uncle’s wrath.

Obviously, there is something sinister going on behind the scenes, but to reveal it would be spoilerish (so do not read the film’s synopsis on the KAFFNY website). However, it directly pertains to grave contemporary issues that demand greater media attention, so covering the film presents quite a quandary. If you haven’t guessed the twist yet, a cold viewing will leave you deeply unsettled, but having that sort of strong, honest reaction to a film is a good thing.

For a thirty-nine-minute short, Princess Eun Hwa is quite a technical achievement, carefully crafting at least a dozen historical eras. However, the real gut punch comes from the poignancy of Song Lee Song’s achingly naïve and vulnerable performance as the Princess. Likewise, there is remarkable subtlety and nuance to Kang Ju Yeon’s turn as her protective maid Snow, especially when considered in retrospect.

Princess Eun Hwa is exactly the sort of short film that compellingly demonstrates why short films deserve more critical and media attention. You will be hard pressed to find a feature released in multiplexes this year that keeps gnawing on your subconscious for as long as this short drama does. Very highly recommended, Princess Eun Hwa is a worthy selection and terrific way to start the festival as part of a free shorts program at the Wythe Hotel in Brooklyn. Readers can also use the catchy promo code "jbspins15" for 15% off other tickets, including After Spring, which screens along with Kiyun Sung’s ripping good short film The Destined King later this coming Saturday (10/15).
Posted by Steve Kopian at October 12, 2016