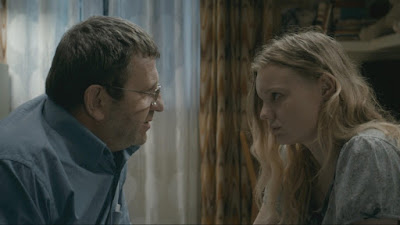 Dr. Romeo Aldea (Adrian Titieni) isn't a good man, but he is a decent one. In its best moments, Cristian Mungiu’s new film Graduation glimpses beyond his stoic, stern facade to see the decent man beneath. About two-thirds of the way through, there’s a scene where he drives home late at night. Apropos of nothing, he pulls over to the side of the road, walks into the woods, and breaks down sobbing. It’s his most overt demonstration of emotion in the entire film. As such, it helps keep Graduation from collapsing under the weight of its own solemnity.

At first it seems like the film will be a post-modern thriller à la Michael Haneke’s Caché (2005): Dr. Aldea’s family is menaced and attacked by an unseen, offscreen tormentor. But what begins as petty vandalism of their house climaxes with their daughter Eliza (Maria-Victoria Dragus) being sexually assaulted right outside her high school. These moments are designed primarily to shock and jar the audience as much as the onscreen characters—spasms of unexpected violence interrupt extended long-takes, whether it’s a rock through a window or a dog running in front of a car. Eliza’s assault may take place offscreen, but we learn about it at the same time Dr. Aldea does. It too comes completely out of the blue.

But after the first half-hour, the film settles into the mode which dominates the rest of its runtime, that of a heady morality play. It turns out Eliza was attacked the day before the start of her high school exams. Having been all but guaranteed a full scholarship to a prestigious British university to study psychology if she gets high marks, Dr. Aldea sets about his small town of Cluj, Romania to arrange some “insurance” in case Eliza is too shaken up to perform properly. Deals are struck and favors are called in as he plummets into the very heart of the institutionalized post-Ceaușescu corruption he so desperately wants to free his daughter from.

Much like in the causal universe of guilt and corruption invoked by Haneke, the world of Graduation seems to be punishing Dr. Aldea for past misdeeds. But they are never fully explained, never fully illuminated. There are hints here and there and even a curious red herring involving a CCTV photograph which may or may not implicate Eliza’s slacker boyfriend in the attacks. But it all leads to an anti-climax where the ambiguity that propelled Caché gets traded for a simple, clearly-defined ending.

After attending the film’s screening at the New York Film Festival, I was shocked to hear one of my fellow critics describe it as hypnotizing. But frankly, I never felt hypnotized nor all that compelled. It flows like a river of dried concrete, its inability to choose between traditional drama and post-modern narrative machinations preventing me from becoming fully invested in its story and characters. There are certainly films out there capable of doing both. But Graduation isn’t one of them.

GRADUATION plays the 11th and 12th at the New York Film Festival.  For tickets and more information go here
Posted by Steve Kopian at October 09, 2016