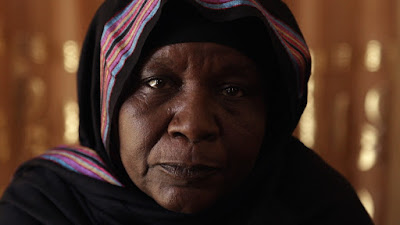 HISSEN HABRE is a look at the survivors of Habre, the infamous leader of Chad who seized control of the country in 1982 and lead a regime that left the country scarred  and brutalized.

Filmmaker Mahamat-Saleh Haroun follows survivor Clément Abaïfouta as he travels across the country talking to survivors and perpetrators in order to tell the tale. Its a brutal story revealed in the words of those left to tell the tale.

This is not a story for the fainthearted. Playing sort of like a combination of SHOAH and the work of Joshua Oppenheimer,  HISSEN HABRE is largely people looking into the film telling us what happened. It is an accounting of the dictators crimes against humanity and it sickens and crushes the audience.  While the film ends on a hopeful note, Habre was sentenced to life in prison in May, the film still one that will leave you feel broken for days.

You will have to forgive me. One can not really review a film like this. One can tell you if it is effective or not but one can not really critique it. How can you critique pain and suffering? Where with SHOAH one could discuss a variety of topics relating to it, and with Oppenheimer's two films you can ponder his framing of the story and his misdirection of the interviewees , here there is only the witnesses and their pain. There is nothing that can be said because there is nothing to say. We must bear witness to the tales so that, perhaps, this will be little less likely to happen.

Highly recommended for those who will bear witness to the crimes and not remain silent.

The film plays October 4 and 5. For Tickets and more information go here.