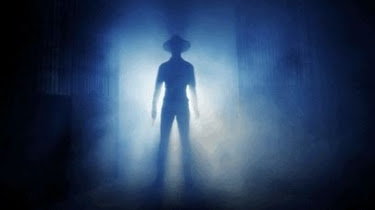 Looking and sounding like a John Carpenter film from the 1970's, thanks to a score composed by the man himself, this film about four friends who wander into a deserted bar and meet the title character who shows up to meet bad people.

A neon soaked horror gem the film feels very much like a Carpenter film with just a touch of Tarantino with it's use of a pop song. There is a reason this film has been kicking around any number of film festivals which is its one of the best horror shorts in years. (The New York Film Festival should have run this as part of their Genre collection).

THE PUPPET MAN plays at noon today as part of the Nightmare Fuel collection of shorts at the Brooklyn Horror Film Festival. For tickets and more information go here.
Posted by Steve Kopian at October 16, 2016