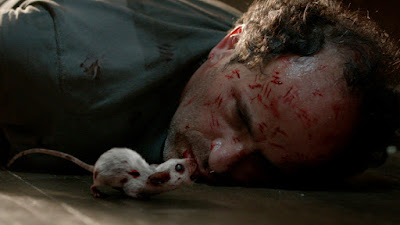 With the New York Film Festival happening the nightcaps are not really going to be happening for the next few weeks. I just don’t have the time. I do have curtain raisers ready for the Hampton's Film Fest which starts this week and the Brooklyn Horror Film Festival next week. The Hampton's is going to run in the next day or two largely because I want to link to some of the films we’ve seen which means reporting on the films we saw earlier today at NYFF which I have to still write up
---
In what can only be considered an extremely rare occurrence I did see the NYFF collection of Genre short films and I will not be reviewing them. For the most part I didn't particularly care for the films all that much with most of the films struggling to be something more artistic than just a good story.

There were two films I liked:

WHAT HAPPENED TO HER is an interesting short doc about the role of naked dead women in movies and TV. Its a good idea that doesn't quite work as presented or in it's running time.

QUENOTTES (PEARLIES) is the best of the bunch about a tooth fairie (see above) coming to collect and protect its tooth collection. Its a ghoulish doodle that may not be perfect but at least knows what it is and goes for it during it's brief running time. Its the only one I will remember from the bunch. A great deal of fun

(I also saw the PRINCESS X short in the Auteur collection but that's just awful and not worth mentioning)
---
Unseen Films contributor and adviser Peter Gutierrez recently wrote a piece for Screen Education on critics and critical thinking called Critiquing the Critics: Part One (It can be found here). One the points he raises is the notion that there are reviewers and critics. Some times they are the same thing and some time not.

After reading the piece I was wondering where Unseen stood in the spectrum,is Unseen a critical collection or just a bunch of reviews?

The truth of the matter is that depending on who is writing (anyone other than me) or what I’m writing on Unseen can be either. Some times the pieces are critical examinations and sometimes simply reviews. The film dictates what sort of piece is created.
--
And now a brief collection of Randi’s links