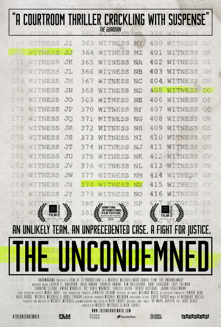 Moving portrait of the horrors of that happened in Rwanda and how the genocide and inhuman acts committed ended up being prosecuted in an unprecedented manner when for the first time rape was charged as a war crime.

First focusing on the prosecutors who went to Rwanda to uncover and prosecute war crimes we watch how the case against Akayesu, the mayor of the village of Taba was slowly put together. We then watch as the rape cases are taken out of the case and then, thanks to damning testimony which opened the door added to an amended indictment. The film then switches to the story of the women who were raped and how they came together to speak for not only the women in their country but also all those who never got to have justice in the 80 years prior that rape was defined as a war crime but never prosecuted.

What can I say, I was moved literally to tears. While the story plays out like a thriller, and one about the change in international law, the film first and foremost always is the story of a bunch of people who sought justice. This is a portrait, in the terms of one of the prosecutors, of the 20% of humanity who refuse to let evil win,. They are a group of people, from the prosecutors to the women themseves who you would want to go have a beer with. Its the fact that we care for the prosecutors and especially the women themselves that we are moved so deeply.

I love this film. You'll forgive me for not saying more than that but sitting at my computer writing the film up I find that I feel good because the film gives me hope that there are good people out there. I don't have much to say beyond that because the emotion  has overridden my ability to say critical things about the film.

I do love the sort of twist in the film where it's revealed that the person who made the rape finally prosecutable as a war crime never knew what she had done. Seeing her being taken aback at the realization 17 years on brought a tear to my eye.

An absolute must see film when it begins it's theatrical run Friday at New Yorks Sunshine Landmark and next week at LA's Laemmle Royal
Posted by Steve Kopian at October 19, 2016