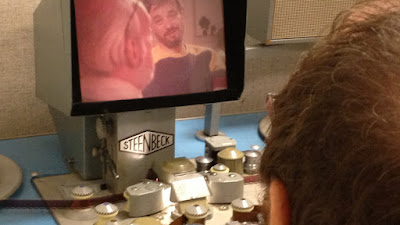 In 1981 Stephen Sondheim and Hal Prince took a 1930’s film told in reverse about how life rarely goes as we plan when we are young and musicalized it. Performed by a cast aged 16 to 25 the show was a notorious flop- but the score found an audience and in the years since it developed a rabid following and became a theater classic. Thirty something years after the show closed Lonnie Price decided to make a documentary recording the memories of everyone involved. Miraculously Price was gifted with the rediscovered unused footage from ABC News who were filming a documentary on the making of the show.

Made with love by show biz legend Lonnie Price, this is a film that is going to be eaten up by theater geeks who love the show and want to see something of the original production (there is video). Price was in the original cast and, like the rest of the young actors never got over it to the point they still speak of the experience with awe. Talking to everyone involved in the show, including Sondheim and Prince, the film is an inside look at the show from the stand point of the cast. It’s a film that gives us an on the ground look at the making of a show.

The problem is that the film requires you to kind of know going in the show. We are only given a basic idea of the plot early and later on things are referred to as if we have a working knowledge of everything involved with plot and characters. There is no sense of the show, or of the time frame things happened in. We get lots of gushing about how great it was to be in it but we don’t know much about it beyond that. Because this is largely told by the cast we only know what the kids knew since neither Sondhiem and Prince say much about making it outside of the casting other than the odd comment. If you aren’t in love with the show going in the film just lays there.

I’m a theater geek but I don’t know the show. I’m not a huge Sondheim fan and for me it was nice, but this hagiographic nostalgia fest for the cast and fans left me kind of cold. It’s sweet but I really would have liked to know great deal more than this was the best experience of their lives. Its great that everyone who starred in it peaked early but it isn’t enough to carry a 100 minute movie- at least for a non-fan of Merrily.

A must see for fans of Merrily We Roll Along and Sondheim. For everyone else skip it

BEST WORST THING THAT EVER COULD HAPPEN plays Sunday the 9th with special guests at a Q&A and on Monday the 10th. For tickets go here.
Posted by Steve Kopian at October 08, 2016