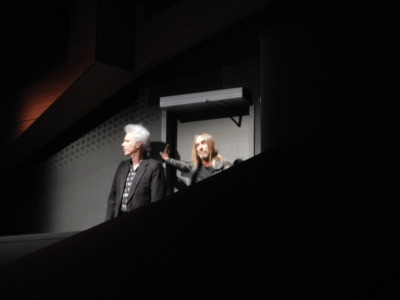 There were a couple of firsts regarding the first screening of Jim Jarmusch’s GIMME DANGER- it was the first Mew York Film Festival screening I’d ever ben at where someone openly filmed the movie. Some nimrod in the fourth or fifth row had his iPhone going during all of the film- or at least the last half hour when I noticed it some 15 rows in from of me. The other first was that this was the first NYFF screening I’ve ever attended where the whole film was seen in a cloud of pot smoke. Whomever was smoking was being kind and giving the entire rear orchestra a contact high. I’ve been to a lot of concerts in my day but this film had nothing on the DANGER screening.

The film is a telling of the history of Iggy Pop and the Stooges. It’s a film that was made for fans by a hardcore fan… which is both a blessing and a curse. The story is of the group is told by Iggy and the surviving Stooges. We are in the trenches as they march along toward the Rock and Roll Hall of Fame. The result is we get tons of great music and lots of great stories from guys who lived it.

The trouble is a great deal is left out. Outside of Iggy there is no real sense of the other members of the band. Who are these guys? We really don’t know because the film is so focused on the group that like a concert the only one who stands out is the front man. There isn’t a sense of the other guys as people. The film also is so focused on The Stooges that other than the odd moment here and there there is no real sense of history outside of the group. While there is no doubt that The Stooges transcend time, hence their ability to have traveled this far and still remain true to their roots, we never get a real sense of how revolutionary they were. And that is the one thing that makes me kind of sad about the film-there is no outside voices brought in to reveal how much they shook the pillars of heaven. We don’t really understand how they influenced anyone who followed them. Yes we see a whole bunch of album covers of influenced artists but we don’t hear their words- what made them want to follow in the Stooges path? We don’t know. The only story we get is that the Ramones came together because they were the only ones at Forest Hills High School who liked them.

I suspect that if you are a Stooge fan all of that it isn’t going to matter. Here is a film that shows the film in all their glory, which for fans will be enough. Iggy and the group never cared about the outside world so why should the film? It should care because the film will never really work outside of Stooge fans. There isn’t enough explanation and linking of things that one can watch the film and know why The Stooges matter. I’m a casual fan, and I like while I like the film I don’t love it. I didn’t walk out of the film feeling I truly knew the group. It didn’t push me the way to go out and buy the albums the way other docs did.

I like GIMME DANGER but in the end it’s a film for fans only.