BABY GIRL (2012) is coming to iTunes and VOD Tuesday 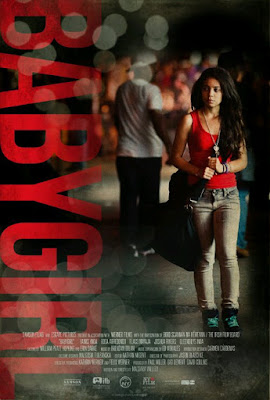 There is a story here so stick with me.

I was working out the schedule for Unseen Film through November and I decided that I was going to  spend the two weeks following the New York Film Festival reposting reviews for films that were either so early in the existence of Unseen that most of you have never seen them or they were of really good films that really slipped off the radar. The first film I slotted was BABYGIRL which I saw back at Tribeca in 2012.

BABYGIRL is one of those films that I thought was going to be a film I saw and forgot, but which ended up haunting my mind. Its a film I would periodically check to see if it was available because I wanted to see it again. Considering that I can't remember any other film I saw that year that's saying a great deal.

So I put the series together. I got the art and I slotted the films with this film as the first one...

...and the next day I got an email from the PR people for the film- "Hey Steve-there is this great small film you probably don't know anything about coming to VOD and iTunes called BABYGIRL. Would you want to cover it?"

Yes I would- I was actually planning on doing just that. So instead of  running the piece in October I'm running it now. And instead of  ending on a plea that you should track this down I'm going to begin by saying this is out on VOD and iTunes Tuesday (Pre-order it here)

Here in the hope of getting you to see this small gem of a film- one that will literally stay with you for years after you see it (and that last bit is the really important part)- I'm presenting my Tribeca Film Festival review from 2012:

I didn’t want to see this film. I had gone out of my way not to see this at any of the screenings during the festival. However on Saturday night, desperate for something to keep the Tribeca experience alive, I broke down and watched the film as part of the Tribeca On Line Festival which was running free films.

Slap me up side the head for being stupid, this is a really good film.

This is the story of a young woman living with her mom. Forced to deal with the fall out from Mom’s poor choices in men, she decides to show mom how bad a choice the new guy is. At the same time she has to navigate the men in her own life.

Better than you think it is going to be and not falling into the trap that many similar urban dramas do, this film is surprisingly good. Buoyed by a great cast and marvelous soundtrack, this is a film that I really wished I had seen on a big screen instead of my small laptop’s screen. This is the sort of film that film festivals were created to highlight.

Track this one down