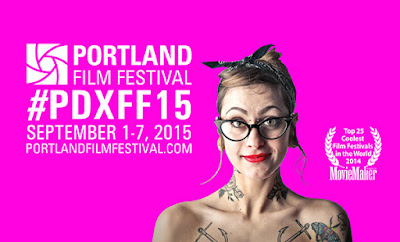 The problem with life is that there is never enough time and money in order to do the things we want to do. Sometimes we have the time and not the money, other times it’s the other way around. Sometimes it’s not enough of both. Usually I’m contented going through life missing things that time that I can neither afford to do or I can’t fit in my schedule, and then there are times when some of the people I know throw things my way and I curse the lack of time and money. One such time is the upcoming Portland Film Festival (It runs September 1 to 7).

Until this year I was pleasantly content not to be aware of the film festival, but this year I was sent a note from Matt Johnstone who is doing the PR asking if I wanted to cover the festival. I figured I’d do a curtain raiser and be done with it- but then I saw the list of films and events I started cursing under my breath because I was on the wrong coast. I immediately posted the press release and then fired off an email to ask if there was any way to remotely cover the festivities.

We’ve already seen three of the films playing at the festival:

THEORY OF OBSCURITY is about the Residents. Its one of the coolest films of the year. I absolutely love the film
SWEET MICKY FOR PRESIDENT was the one film I saw from Slamdance back in January and it’s till one my favorite films of the year.
I believe Hubert saw CROCODILE GENEDY but I don’t think a review appeared at Unseen or one of his other haunts

As for the guests the film festival isn’t skimping. They have master animator Will Vinton. I know everyone jokes about the California Rasins but Vinton’s work goes way beyond that including a version of THE LITTLE PRINCE which has never been equaled.

Wendy Froud is going to be there. The festival is going to celebrate her work as film designer on things like LABYRINTH and DARK CRYSTAL. I’ve met Ms Froud fleetingly and she was completely charming to a guy who went fan boy. I’m sure that anything she does is going to be a must attend.

Ideally I’d be covering all of the films we haven’t seen before- however because life happens we’ll only be covering 8 or 9 films.

However just because My hands are tied that doesn’t mean you can’t go see something. All the information is can be found on the festival web site. And if you’re not in or around Portland why not start your Labor Day weekend early by buying a plane or bus ticket and go see something.

Look for reviews of at least films starting Tuesday night

For tickets and more information go here.
Posted by Steve Kopian at August 29, 2015