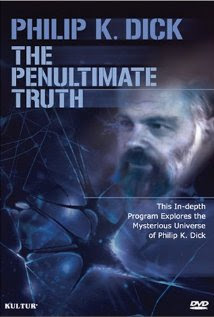 I went into Philip K Dick The Penultimate Truth with a bit of trepidation. I had beard it wasn’t all that good, however upon seeing it I found it to be very informative and strangely entertaining.

Framed as detectives investigating Dick’s life the film takes us from his birth to death and consists of friends, colleagues, his therapist, ex-wives and girlfriends telling about Dick’s life as they knew it. Intercut with it all is a speech he gave in 1977 at a Science Fiction convention in Metz where he explains about the mystical experiences which inform his work. The film explains where his world view came from, how it changed and why Dick’s constant wrestling with reality fueled everything he did.

I like this film a great deal. While the film doesn’t go deeply into much of his work, it does give us a nice overview of it and it explains why he wrote what he did. It also clears the air about the weird rumors I had always heard about Dick’s mystical visions by not only allowing dick to speak for himself via his stories and the Metz speech, but puts his thoughts into a context of the general reality by having his friends and family say where he was at the time stuff happened. While we don’t know what happened when he said he was shot by a pink beam of light and was given a glimpse at a “truth”, we come to understand why he thought it may have been mystical and why it influenced what he wrote.

I find that every one’s views into Dick insightful and he comes off as just a guy and not a mad man. I don’t find there to be anything wrong with what anyone says about Dick, with the exception of his girlfriend Sharon who talks about wanting to cringe when Dick gave the Metz speech which is seen in the film. She talks about his losing the ability to write and how the ideas expressed are kind of nuts. Perhaps they were in 1977 however now some 40 years on the world view expressed has kind of taken hold and is very part of the reality we have.

From where I stand this is a must see for anyone who love Philip K Dick and his works
Posted by Steve Kopian at August 15, 2015