ASSASSINATION CLASSROOM @ Fantasia, 2015: A Killer Education in a Flawed System 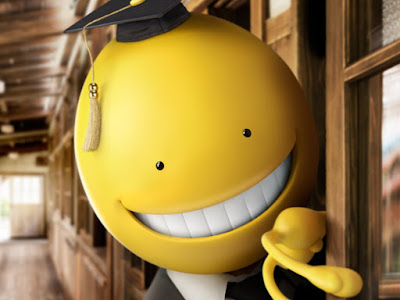 The Japanese scifi comedy ASSASSINATION CLASSROOM is built around a pretty madcap premise: A seemingly hostile and seemingly omnipotent alien threatening to destroy Earth has struck up a backroom deal with heads of Japanese defense forces to allow it to teach a class of struggling students how to destroy it for the 3 months leading up to the decimation date. It’s a confusing situation to be sure: Success would mean ending the imminent threat to humanity posed by the bewildering life form, but it would also mean the demise of the mostly friendly visitor who comes to grow on the students he teaches.

This takes place in a version of the future in which a ruling class maintains its dominant status and comfort by maintaining a large population of less competent or confident types to do the distracting and undesirable grunt work that will allow this parasitic relationship to continue. At least, that was described in a blur of narration at the very beginning of the movie. References to this dire situation are few and far between later on. The students who would be chosen to work with UT, a nickname they don on their intergalactic instructor referencing that most famous space visitor from 80s movie lore, are meant to be among those destined for a dimmer future. And they are painfully aware of it, concluding that their class section 3E refers to the ‘end of the line’ and no going forward for them.

Under the guise of UT’s mischievousness, there would seem to be an altruistic agenda, making the jolly looking extraterrestrial an unlikely kindred spirit to James Edward Olmos’ protagonist in Stand And Deliver for the current and likely future of manga and anime consuming set. This sounds like heady stuff, especially with the added allusions to an ultra classist dystopian future. Unfortunately, these bigger themes become virtually lost in the shuffle due to this movie’s mode of delivery. 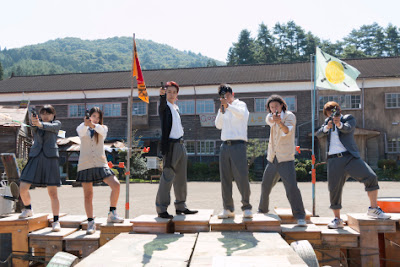 ASSASSINATION CLASSROOM falls squarely within a growing phenomena of live action movie adaptations based on manga and anime. Where those two formats lend themselves to episodic storytelling, a feature length movie could and in this case does suffer from too many of these elements being shoehorned in. Here the zany situations that occur one after the next can feel like a jumble of ideas that were poured out of a bag, strewn out, and clumsily strung together with only a slight regard for character or story or thematic development. While not a reader nor viewer of the series (an admission I realize casts all sorts of doubt on my assessment) I felt like I could see individual chapters of a series being pasted into the big picture: There’s the time the heartless android student is sent to the class to kill UT and is then rendered into a cooperative, communicative member of the class. There’s the time the short permanently scowling boy wielding deadly tentacle-like hair, who is somehow related to UT, is sent to kill the alien teacher and then not so successfully rendered into a member of the class. And so on.  In effect, it feels like so many ideas raining down from the sky with no rhyme or reason. Fun when digesting one at a time in single servings, but trying to keep track of them across a two hour viewing experience not so much. And while doing so, those bigger ideas hinted at in the movie’s opening don’t make much of an impact.

Another difficulty I had connecting with the bigger pictures is a lack of concern for characters, who seem as 2 dimensional as the pages they were originally brought to life in. I know for instance that Nagisa is introverted and insecure and that his time spent with UT brings out a stronger, bolder persona inside. And I want to feel something as his story unfolds, but it is very difficult to do so because of how superficially he is rendered. The same can be said of his classmates, not to mention the obligatory bad guy who is just plain bad because well…he’s just a really bad guy. And then there is the curious case of UT himself (I would say itself but his voice and predilections pretty pointedly suggest a male identity). 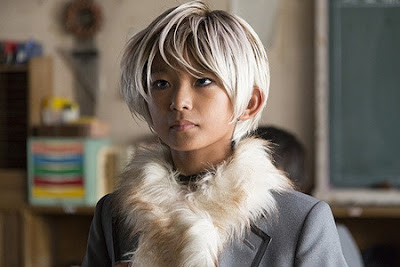 An amorphous smiley-faced creature with tentacles for arms, he may in fact be the perfect buddy for a generation growing up with apps and video game characters numbering significantly among their friends. He is the exact bright yellow of the most popular emoticon that has insinuated itself into mobile-to-mobile communications. And his countenance never changes. He is virtually un-offendable and untiring: In effect the perfect 24-hour, all access plaything. Perhaps I look at him, somewhat skeptically, as the perfect vehicle for ironic detachment as he laughs off the attempts of his students to assassinate him with a uniform chuckle (reminiscent of The Simpsons' Doctor Hibert) and explains how his self defense systems came to his aid. At first these mixes of a little bit of science and high percentages of cockamamie bullshit are amusing, but soon grow tiresome. Perhaps it’s problematic for me that this central character, charged with nurturing his wounded students’ development, is incapable by design of showing any change of mood himself. There are some attempts to show the measure of UT’s earnestness and ingenuity, like when he flies a student struggling in English overseas for some firsthand experience, But it is more a matter of understanding the movie’s intention, and not feeling much of anything.

This again, may not be a problem for certain viewers, particularly those who are younger and perhaps spend greater amounts of time with and put more stock in virtual entities. It may also be indicative that this is a product for consumers of rampant amounts of anime and manga, who carry a completely different set of concerns than the ones I had. A perusal of the comments for a posting of the movie’s trailer on Youtube (hey I do my research) show a lot of furor over the similarity characters to have to their manga and anime counterparts, the apparent gender of characters for whom there had been ambiguity, and the J-pop and K-pop groups which stars of the movie are members of. These arguably more superficial questions do feel as though they are the movie’s prime concerns. And it can be distracting. Taking in the coiffed hair and stylish threads of the students in Class 3E can make it difficult to remember this is supposed to be the ragtag group of misfits who we are meant to rally behind. 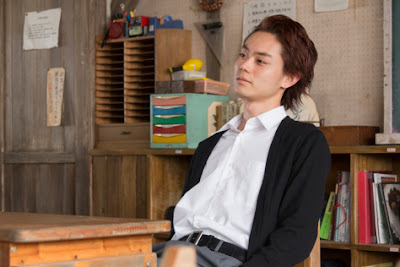 While the constant barrage of 'logic dropped from the sky' storytelling wore on this increasingly out of touch viewer’s nerves, thus cementing my status as an aging filmgoing curmudgeon, It may very well be the ideal mode of entertainment for a short attention span set, more comfortable with short bursts of information being dropped continuously in their laps. Perhaps they are even picking up on the bigger worldview concerns just hinted at and absorbing all the implied character traits of the cartoonish figures. I can’t help but wonder, though, if the interjection of some more traditional sensibilities might allow for everyone who comes across the movie to take away a bit more of the story’s potential significances than the way it is now.
Posted by mondo_curry at August 07, 2015