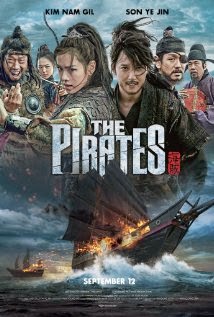 When the seal of the newly forming Korea is swallowed by a whale the race is one to find the whale and get the seal back. This sets in motion various factions of pirates, bandits and officials in a mad dash to get the seal and win favor.

Great looking film has some great fights, some killer set pieces but not a hell of a lot of logic. Its a weird macho soap opera (with a pirate queen as one of the leads) where everyone ends up screwed over by everyone early on and then brought into conflict later on. Its sound and fury signifying nothing.

To be honest I lost interest 40 minutes in and went off to hang my laundry while the Bluray played on without me. WHen I came back I had missed almost nothing and just settled in for the final hour of constant motion.

Its not a bad film but it never fully grabbed me. I probably would have liked it more had I seen it in a theater. Worth a look if you're undemanding.
Posted by Steve Kopian at August 30, 2015