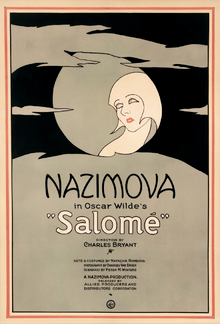 Alla Nazimova stars in a an adaption of Oscar Wilde's play of the same name. It is a trip and a half.

Telling the story of Salome and her lust for John the Baptist, the film is a smoldering cauldron of lusting desires as Herod lust for Salome who becomes entranced with a jailed John the Baptist who wants none of her attention. Spurned she agrees to dance for her step father if he'll give her anything. He agrees only to be horrified that she wants the Baptists severed head to kiss.

Lets face it this is one of the most lustful, sexual films you'll ever see where everyone remains dressed. Sex oozes off the screen and on to the floor. Salome is pure sex. While she is at first seemingly unaware of her status as a lust object, she eventually full embraces it to get what she wants. She's so sexual that even the obviously gay guards want to have her.

This film will make you hot under the collar.

A decided piece of art, the film appears to be Beardsley's illustrations for Oscar Wilde's play come to life.come They are beautiful, if minimal black and white sets and costumes that are worthy of being hung on your wall. However at the same time the film's one flaw is that the film can be overly arty to the point that you end up admiring what you are seeing instead of falling passionately in love with it.

Ultimately this is a must see for anyone who loves film or any sort of visual medium.  This is a true piece of art.

Now to try and track down a screening in a theater so I can see it BIG.
Posted by Steve Kopian at August 14, 2015