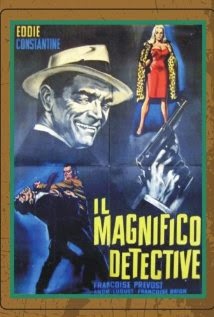 Keep Talking Baby really doesn’t belong here at Unseen. Its not a particularly good film, actually you could argue it’s a bad film. However the film does have Eddie Constantine in it and since I’m trying to get you all to know the man and his movies I’m going to talk about it.

Based on a hardboiled novel called Strange Witness by Day Keene, Keep Talking Baby is a very talky film that has Eddie playing a character named Jackson. Jackson is a nightclub entertainer who has been framed for murder and sent away for 20 years. He breaks out of prison to get the guys who framed him. He quickly ends up trying to track down leads with a baby in tow.

No it’s not funny nor particularly exciting.

What it is is rather draggy as Constantine goes from person to person and tries to get more information while holding on to the kid. While Constantine has been convicted one at least one of the cops doesn’t believe he did it. The exchanges between Constantine and the cop are the most interesting material in the film.

While I have not read the source novel (which has been used a couple of other times as the basis of films) I think the problem with this film is that they changed way too much. Actually they jettisoned pretty much everything other than it being a wrong man looking for revenge. The original had the Constantine in prison for seven years and then getting out and dealing with an odd collection of hard boiled film noir like denizens. They are all gone and replaced by cookie cutter blandness.

While Constantine is good (even if he’s sleep walking through it all) I can’t recommend this to anyone other than a Constantine completeist like myself. If you want a better film try Hail Mafia, some of the Lemmy Caution films or SOS Pacific.
Posted by Steve Kopian at August 27, 2015