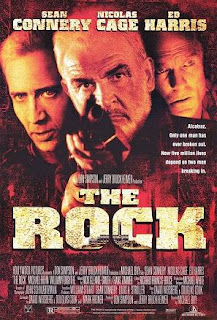 I'm still puzzled as to why this film is on Criterion, but I'm easily confused. Personally I think ARMAGEDDON makes more sense than this one.

Michael Bay's THE ROCK has Nick Cage teaming up with a bunch of Navy Seals to break into Alcatraz (the ROck of the title) in order to stop Ed Harris and his team of rogue soldiers who are threatening to shoot nerve gas into San Francsico if  the US govenment doesn't pay them millions.  Since stealth is required the good guys forcibly recruit Sean Connery who is the only man to have escaped from the prison. COnnery is a prsioner who doesn't exist- having stolen all of J Edgar Hoovers files.

No it makes no sense.

It is a great deal of mindless fun. It's gunfights and macho posturing as Cage and Connery bond in the tunnels under Alcatraz. It all looks good even if none of it makes any sense. Its films like this that gave Michael Bay his reputation as being a mindless director.

watching the film for the first time in probably a decade I was struck by a couple of things. First  was how formulaic it is.  How many times do we get the outside brought along because he's the only one who rises to the occasion after a mishap kills the entire force and he must go on alone (or nearly alone)? Watching it I kept thinking of EXECUTIVE ACTION with Kurt Russell and the great flip where Steven Segal dies.

The other thing that hit me was how the need for literal thrill rides filled the films of the 1990's. I mean you have these set pieces in all these films where you could build them into an amusement park ride- look at the Indiana Jones films or Jurassic Park or here where we get a chase on carts under the island. Here as in most films of the day the chases look cool but serve no real purposes. What are they doing on those creaky carts anyway?

Don't get me wrong its a fun film- but its very dated because of its story structure and uber mindlessness.

If you've never seen it give it a shot.  If you have and it's been a while try it again- seeing it after some of the TRANSFORMER films you realize its not that bad after all.
Posted by Steve Kopian at August 28, 2015