Flame of the Barbary Coast 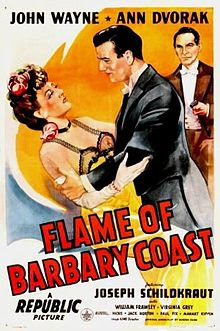 John Wayne plays a gambler who at the turn of the 20th century blows in from Montana into San Francisco. Falling in love.with a singer (the title character) he finds himself taken for every penny he has by an unscrupulous saloon keeper. After heading home to regroup Wayne returns planning on wooing the girl he loves and getting back the money that was taken from him.

This grand musical drama is exactly the sort of film that's highly entertaining but nothing that could ever get made today. Its very much of the time when some movies didn't try to do anything other than entertain. Watching the film you get the sense that the filmmakers weren't trying to do anything deep, they just wanted to distract you for two hours.

What I liked about the film is that even though you suspect that good will triumph and that Wayne will get the girl, you never are really sure what the out ome is going to be until the very end. When it comes and how it comes is really nice and nicely not contrived.

This is a neat little film, that while may not become one of your all time favorites will entertain the hell out of you while its on.

(And yes it's considered a musical, but no John Wayne doesn't sing, that left to the performers on the various theater stages)
Posted by Steve Kopian at August 23, 2015