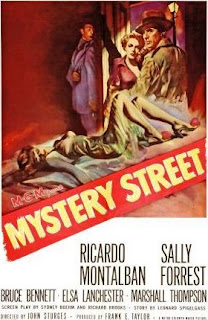 One of the first headlining vehicles for Ricardo Montleban is also one of the wonderful looks at early police forensics that I’ve been running into lately.

The plot of MYSTERY STREET concerns the investigation by Montelban as a police detective into the discovery of a skeleton on a beach near Hyannis Massachusetts. The case brings him into contact with a doctor at the Harvard Medical school (Bruce Bennett) an expert in forensic science. The film opens with the events that set everything in motion- we see the victim, a young lady with a rich married boyfriend trying to get her beau to meet her. He won’t so she Shanghai’s a drunk guy in the bar and drives out to meet her man. When the drunk guy objects to the drive the soon to be dead girl dumps him and then drives off in the car. When her body shows up the police get involved. When the car is found the drunk guy ends up in jail. It looks like an open and shut case but doubts linger and Montelban refuses to just let it all go.

Once the slow opening fifteen minutes which show us what happened (but not who did it) are over the film picks up steam. The investigation is the meat of the film and it’s absolutely compelling. Yes we have a pretty good idea where this is all going, and who did it, but, as three generations of TV detective shows have taught us, seeing how the detective solves the crime makes for a great evening’s entertainment.

As with similar films from the period you’ll be horrified by the lack of rules of evidence- Bennett pulls the fatal slug from the car and manhandles it in a way that would give the CSI teams fits. I mean Bennett pulls the slug out of the car with his bare hands before handing it to Montleban who puts it in his pocket. SO much for the chain of evidence and not contaminating it.

There is a maturity to the film that you didn’t see in films before ww2. You have lot of subtle things going on such as the fact that the heavily accented Montleban is looked down on by some. When he meets the killer, a wealthy and patrician member of society he is put down as not being in America all that long. Montelban shrugs it off with a quip. I like that the film stands up against the subtle racism rampant in our country.

I liked this film a great deal. I’m very happy that I stumbled up on it when it recently played on Turner Classics. Definitely one to keep an eye out for.
Posted by Steve Kopian at August 22, 2015