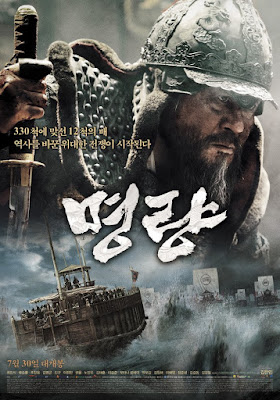 The Admiral Raging Currents is the highest grossing film in the history of Korean cinema. It is a huge scale action film that concludes with an almost hour long sea battle between the Korean and Japanese navies.

The film begins in 1597. The Japanese have invaded Korea and are marching on the capital. The one real hope for the country to contain the Japanese, the navy, has been frittered away by a leadership that was incompetent. The navy had been built into a powerhouse by Admiral Yi, who was falsely accused as being a spy. Those that replace Yi foolishly engaged the Japanese until only 12 war ships were left. With no one else to turn to and realizing they had been wrong about Yi he was reinstated. As the film begins Yi has been told to forget the navy and send his men to join the army. Yi refuses and plans to take on the 333 plus Japanese navy with his 12 ships thus setting in motion the battle of --- one of the gratest sea battles ever fought.

Let’s cut to the chase- the first hour of the film is okay. It’s all set up, and character development. The first hour is lots of talk and posturing. Its not bad it’s not as involving as it could be. I kind of turned off. However as things get closer to the battle I became more and more engaged. About the time that Yi burns the village of his men I was wondering how this was all going to go.

The second hour of the film is a huge sea battle. It’s absolutely amazing. It’s one of the best battle scenes you’ll likely to have ever seen. Its crashing ships, slashing blades and exploding cannons. It’s something that will have you audibly reacting to what’s on screen. This is way cool and then some. It’s a bloody bruising battle and as my dad said somewhere in the middle of it “this is the first time I realized how brutal this kind of fighting was”. It was and it is. If you have a home theater system this is a film that you’ll want to use to crack your plaster with. The sea battle is why you’ll want to see the film over and over again. Its why I’m glad I have the film on Bluray.

Once this film gets going it will blow your mind. A must see for anyone who loves action films.
Posted by Steve Kopian at August 29, 2015