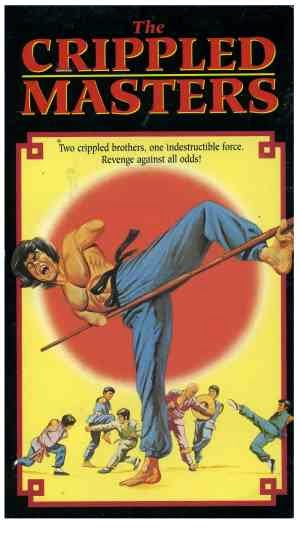 I’ve heard that Crippled Masters referred to a pure exploitation and a freak show, and to be honest I can’t argue with that assessment since the film since it is exactly that. On the other hand it’s a pretty good action film on it’s own terms and worth going to the exploitation ghetto to see it.

The film opens with one of our heroes getting his arms chopped off by an evil gang leader. He’s transgressed so they chop off his arms and throw him into the street. (Never mind it’s blood less and he’s wandering the streets immediately after) Abused at every turn he eventually meets up with a guy who helps him recover. However things are fine for a short while, until the gang comes and pours acid on out benefactor’s legs withering them. The pair then fall in with a contortionist martial arts master who trains them to get revenge.

With just enough narrative to keep things interesting Cripple Masters is way better than it has any right to be. It moves like the wind, never stops for real world logic or reason and just crashes head long toward what you know is coming , a climatic show down with the chief bad guy. Its exactly the sort of thing that is perfect for a Saturday on the couch with a bowl of popcorn.

If the film has any real flaw its that once the film, gets about an hour in the plot falls away for a series of fights. They aren't bad but because our heroes have limited mobility things get repetitive. Its not fatal but it just isn't as much fun as what went before.
Posted by Steve Kopian at August 09, 2015