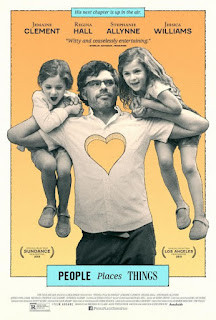 Comics are cool and hip, right? Well, maybe not that superhero stuff necessarily, but those "literary" graphic novels that tend to get featured in the New York Times and such. Those and the people who make them are worth writing an indie romantic drama/comedy around, certainly.

I am kidding here, partially -- but writer/director James C. Strouse's generically-titled People Places Things seems to take that conceit. While I give Strouse credit for some of his details, much of the "graphic novelist" elements seem like a cute motif in the larger story. While they add some unique touches, they do little to elevate the movie much beyond where you'd expect it to be.

The extended title sequence features blue-pencil comic art illustrating how graphic novelist Will Henry (Jemaine Clement, better known as half of Flight of the Conchords) met his current partner and mother of their twins, Charlie (Stephanie Allynne). As openings go, it's intriguing but not necessarily insightful. Artist Gray Williams, who provided the art, illustrates these scenes in a typical indie comics way (think Adrian Tomine) -- clean and a bit cute. It does little to tell us anything about who Will and Charlie are, however.

We first meet them in the flesh at their twins' birthday party. Will catches Charlie cheating on him with "off-Broadway monologist" Gary (Michael Chernus). It's an abrupt introduction to these characters -- especially to Charlie -- and sets up the meandering tone the movie often has.

When the story picks up a year later, Will is in bad shape, drifting through weekends with his (admittedly adorable) twin daughters (played by sisters Gia and Aundrea Gadsby) and the class he teaches on cartooning at School of Visual Arts. When a student, Kat (the amazing Jessica Williams) sets him up with her mother, Diane (Regina Hall),Will begins to question the direction of his life is taking. Or something. I think that's what we're supposed to think.

While Will should be an oblivious manchild, Clement brings such sweetness, wit and charm to the role it's hard not to root for him. His initial scenes with Diane have a playful antagonism that show someone who's smart but cautious with who he lets in. Even though the movie does have a few non-surprising scenes, like where Will fails to get his daughters to school on time -- his gentle but deep love toward his girls is honest and heartfelt. Will is not without his faults but he's man who is trying to do the best he can for his daughters and himself.

And that's really the major flaw of the movie -- as appealing of a leading man as Clement makes (and no doubt, he's already a star, but he's wonderful in this), Will has no real journey. And the major issue is with the character of Charlie.

While some of Charlie's fears and complaints are understandable -- she gave up her own ambitions for Will's career and after becoming a mother -- her character is written in a shrill, unlikable way (and introducing her while she's cheating on the father of her daughters does her no favors). Allynne does what she can with the role, but Charlie feels unfortunately selfish and flightly because the movie requires her to be. I never really felt like I understood her motivations of what Will saw in her, other than they shared a history. (It doesn't help that Clement and Allynne have little chemistry.)

But let's get back to the comics stuff, which is what interested me in this movie in the first place.

While Will's career as a graphic novelist is somewhat integral to the plot, it also too much like window-dressing. Will could've been any sort of artist -- a writer, a musician, an actor. The "comics" aspect does come across way too much as a bid for hipness, especially when it comes to a somewhat forced conversation about the relevance of comics as American literature with Diane. I have fears that "graphic novelist" will quickly become the creative occupation of choice for protagonists of indie movies.

The shining star in this movie is Kat (and if there's any justice in the world, Jessica Williams will be a huge star). She's a 19-year-old black woman who wants to make comics and hangs out (or works -- it's not entirely clear) in a poorly-disguised Bergen Street Comics. She's working on a comic with her life with her mother (and the men her mother dates) and from what we see of it, it's pretty awesome. Will recognizes it's awesome too, and he shares his work-in-progress with Kat. They have an intriguing, complicated relationship that feels built on mutual respect rather than romance, In fact, when Will misreads Kat's intentions initially, she shuts him down so fast. It's refreshing to a younger woman and an older man connect on a level that's not sexual at all.

I loved that the movie recognized that it's young women who are the future of comics, and choose to represent this with a woman of color. There was not nearly enough of Kat in this movie.

If you watch the trailer, you'll know what to expect with People Places Things. It's by no means a bad movie, but it's slight and "cute" is probably the strongest word you can come up with for it. It's definitely cute. It's definitely a pleasant way to spend 90 minutes. But sadly, the more interesting elements get lost in movie that decides to hit the most obvious beats that the appealing cast can't overcome. There is a good movie about these characters (especially about Will and Kat) but this movie just isn't it.

(People Places Things is in theaters and on Video On Demand starting Aug. 14.)
Posted by Eden at August 12, 2015