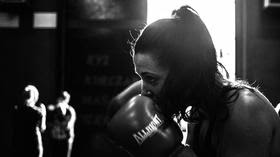 DOWN BUT NOT OUT is a haunting film that follows some amateur female boxers as they take their first steps into the ring. The film does not go into all of the details of their training other than to show them as they prepare for their fights on the day of their bouts.

Shot in a high contrast black and white the film’s mixture of sound and image is more dreamlike than a film with the result that sitting and watching the film on TV in a darkened room I wasn’t sure if I was dreaming or not. It’s a feeling that’s intensified by the films fly on the wall nature. We are not a participant but an observer and what we observe isn’t always the girls for example during part of one bout we are focused on one of the seconds as he watches what happens in the ring.

This is a neat little film. I really liked it a great deal. To be perfectly honest when I sat down to watch it I was expecting a typical documentary that hit all of the clichés of boxing docs but noe of that was here. We simply focus on small period of time and what transpires and it makes for something truly special. Available on various VOD platforms including Amzon, this film is worth your time.
Posted by Steve Kopian at August 18, 2015