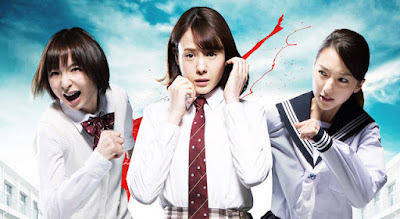 Sion Sono, not one to rest on any laurels, seems to have achieved an astonishing feat with his latest meta-tation on his craft. He has made an entry into one of Japan’s famous pop fiction franchises, possibly being called on to revitalize it, which goes so far as to produce a work that slices the source material and movies of its ilk to the bone with a razor sharp criticism.  Imagine a Trojan Horse, if you will, that entertains as it attacks, in a balancing act that few directors are deft enough to pull off.

So many questions arise while watching this film, which holds some notable stylistic departures, even for a director whose oeuvre is already as diverse as Sono. Like the 2004 novel and subsequent movie and television adaptations on which it is based, the native Japanese title for the film is ‘Riaru Onigokko’ (riaru is just a phonetic interpretation of the English ‘real’ and onigokko means tag, though it’s a much cooler way to say it than in the US, referring to the game as ‘being chased by a devil.’) Whether the original story shared any of Sono’s critical subtext or if its author Yamada Yusuke felt any enthusiasm for the director’s radical reinterpretation are questions I’d love to see answered. All I can do for now is speculate, especially considering this is the first version to be translated into English. That in itself may serve as an eyebrow raiser considering the seemingly insatiable international appetites for Japanese pop culture that welcomes imports of this nature. 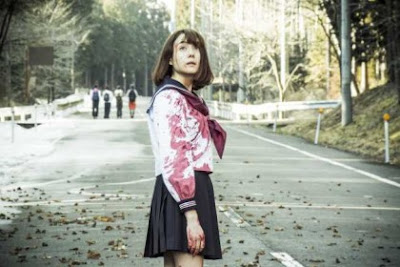 From what I could gather the onigokko that came before were fairly derivative exercises. There is a Japan that exists in a distant future setting run by a ruthless dictatorship that sets upon its people by eliminating those that bear the common surname, sato. And it dispenses with them by way of killer robots that wear cheerful expressions on their faces. If this premise, which must have sounded less tired 10 years ago, was an inspired one, less generosity can be granted toward its first motion picture incarnations, which include numerous sequels and a television special.

Sono approaches the premise with a radical paintbrush, redacting the complexities of prior versions until we are left with a hypnagogic chase parred down to its simplest elements, composed as a weightless feathery dream sequence.

It is experienced through the starry eyed perspective of a junior high school student, Mitsuko, careening along on a placid bus ride bound for a school trip before being suddenly caught in the midst of a deadly and inexplicable chase. The pursuit moves across worlds, leaving Mitsuko to attempt to make sense of what is happening as all the while, she is thrust stormily from one logic-defying scenario to the next. 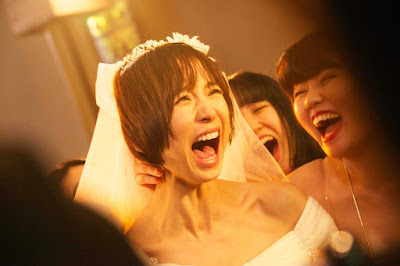 The weighty aspirations of TAG’s commentary is revealed as the significance of its predominantly female cast becomes apparent.  Sono has always had as much concern as enthrallment with his female subjects, even if he is more often associated with the latter. It is most readily apparent in NORIKO’S DINNER TABLE, or perhaps his most archetypically horror production EXTE, at least until TAG has come along. As the director skewers genre tropes of works along the lines of the movie’s namesake, it begins to cast into light the way women are positioned in them, and the surrounding culture that fosters this oppressive relationship. Moments of outlandish humor peppered throughout the onset become far less amusing as the fantastical struggle of the movie is supplanted to a far more real one.

Boldly, Sono appears go so far as to include himself in TAG’s larger indictments. Depictions of school girls’ skirts conveniently lifting as the wearers revel or run from danger recall the similar imagery as a source of humor in the director’s earlier films. And one can’t help but be reminded of the gruesome act of annihilation that initially brought the director heaps of international attention some 15 years ago as they watch the startling instances of mass evisceration that take place here. If Sono isn’t exactly apologizing, he is surely reflecting and including himself in the conversation about phenomena that is too complex to give way to easy answers. 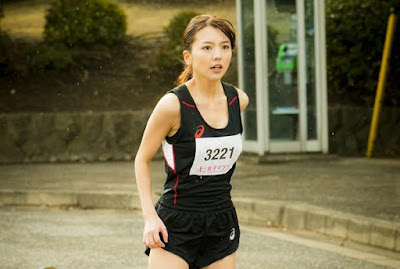 If WHY DON’T YOU PLAY IN HELL?, Sono’s warmly received recent feature was a love letter to bygone 16 mm filmmaking, then TAG could be a reconciliatory embrace of digital technology,. Though make no bones about it, Sono is going to have his way with it. Modern technological filmmaking tools render both mundane interactions between Mitsuko and her peers, and turbulent action sequences alike, in magnificently intensely detail; but it also underscores the drawbacks of the quickly amassing works of entertainment that are common byproducts of the latest tools of the medium.  As Mitsuko moves between realms, it is too seamless, pointing to a lack of affect in the world of green screens and quick digital edits.

In addition to Sono digging more overtly into bag of digital tricks for TAG, other pleasant departures from his norm are on hand. Not the least of which, at 85 minutes, it marks a radical departure from his usual long form leanings. There is a big changeup in the palette of music he works with the time around. While the director’s choice of music, always informed and always excellent, has ranged from frenetic free jazz to stoic classical scores and even funk inspired indie rock, for the first time the director builds a mood around massive swells of noise rock. The most pronounced contribution to the film’s soundtrack is from the band MONO. Amidst the film’s largely cynical outlook, the shimmering emotive instrumental track offers a counterbalance, conveying a sense of hopefulness around the young female protagonists as they band together. Then again, perhaps there is a double edged bit of slyness to the track’s use too, as it lulls viewers into a sense of calm and tranquility; we arguably should know it is too ideal to be real and lasting.

With a poignant ending that cuts through the film’s deceptive barrage of noise to show something both rebellious and tragic, TAG perhaps surprisingly does what all of the best of Sono’s films have: raise questions and provoke thought while delivering an unshakeable visual statement.

TAG plays the Fantasia International Film Festival tonight for its North American premiere. For more information and tickets, visit its page on the Fantasia website.