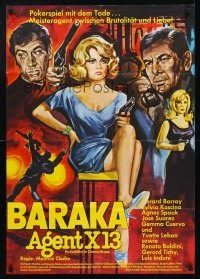 Can't you be serious?
If were serious I wouldn't be in this idiotic racket

Why try to be more cynical then you are?
Its my occupational disease


Perfect MST3K material Baraka X77 (aka Agent X-77 Orders to Kill) is a spy film made in the wake of Bond mania in the 1960’s. Part spoof part rip roaring action film Baraka X77 is a great deal of fun for anyone in an undemanding mood.

The film opens with a daring airborne robbery as a passenger on a jet liner gasses the other passengers into unconsciousness- but not before he has to fight off several people. The material stolen is the formula for a new rocket fuel. The plane crashes (revealed in a sequence that is unintentionally hilarious) and the only survivor is the scientist who came up with the formula. Springing into action the authorities send in Charles (Serge in the original) Vadile their trouble shooter to track down the bad guys.

Great action mixes with funny lines and screamingly funny gaffes as our hero jets around the world to prevent the formula from getting into the wrong hands. I’m not sure if the verbal insanity is a result of things being a direct translation of the script or if it as the result of the English translator simply relieving boredom by spicing things up, but as it stands this is wicked comedy.

The film is hampered by a budget that is less than the producers probably hoped for, Things happen off camera,sets can look a tad anemic.  That may mean its a bit more real world but at the same time the film wants to see like a big budget action film.Ultimately its all forgivable because the film is so good. I mean how can you hate a film where the hero has a gun put in his back-he gets it from the bad guy who surrenders-but the hero shoots him anyway? You can't.

If the film has any real flaw it's the music- or rather one piece of music. the main theme to the film seems to be a jaunty piece of zither music which is repeated through out the film. It  wrecks the otherwise enjoyable (if jokey) film.

I really like this film a great deal. Yea its easy to make fun of it, but its also just a lot of fun. Is it high art? No but it is a blast and a half.

Definitely one I'll be revisiting often.

Thank you Sinister Cinema for putting it out.
Posted by Steve Kopian at August 20, 2015