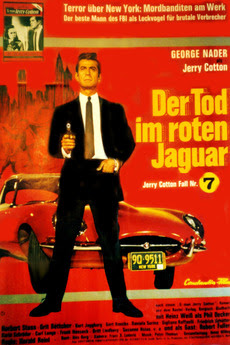 Jerry Cotton is back in his 7th adventure- Death in a Red Jaguar.

As regular readers of Unseen Films know I'm a big Jerry Cotton fan. Two years ago I reviewed the other seven films in the series (those reviews can be found here) and I had a grand time doing it. The only one I didn't get to was this film, which I could only get in a cost prohibitive German Language edition.  WHile I still haven't found an English language version of the film, I didn't have to pay 40 plus bucks to see it.

This time out Cotton is chasing after a gang of assassins for hire. Organized on a bigger scale than your usual gang of killers Cotton has his hands full as these bad bad guys who will stop at nothing to fulfill a contract, including killing kids.

Filled with great set pieces this film moves like the wind.From the opening shoot out, through the chase that includes Jerry hanging under a truck and then literally cliffhanging, this is a great film. It never lets you catch your breath.

I especially liked that there was a flip early in the film where the man who I thought was going to be the main villain was done away with when caught by Cotton. It was a clever move that suddenly made anything possible.

This is a super little film and like all of the Jerry Cotton films worth tracking down.
Posted by Steve Kopian at August 26, 2015