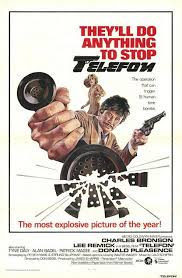 If you know me long enough odds are you’ll have gotten a phone call that began with the above lines. Most of my friends just shake it off knowing I’m insane, but a few will ask “what the hell are you saying”

What I’m saying is the phrase used by Donald Pleasance to awaken long buried Soviet sleeper agents in the United States. It seems he’s a pissed off Soviet agent who wants get back at his former masters by causing a war with the US. The Soviets don’t want it so they send Charles Bronson to the US to try and stop them. Hooking up with Lee Remick he begins a game of cat and mouse aimed at stopping a potential nuclear war.

A grand old school political thriller TELEFON was once a staple of cable TV in the late 70’s and early 80’s . While the film is long forgotten because the cold war films have fallen out of favor, It still holds up as an enjoyable popcorn film. More thriller then action film this is the sort of film they don’t make any more, namely one that relies on characters instead on motion to tell a story. Sure there are some good set pieces but mostly this is just good characters circling around each other.

I really like this film a great deal. To me it's an old friend. Its one of those movies I stop and watch each time it's one- which now isn't that often-which is why I bought the DVD.

Track this film down and get some popcorn and enjoy
Posted by Steve Kopian at August 19, 2015