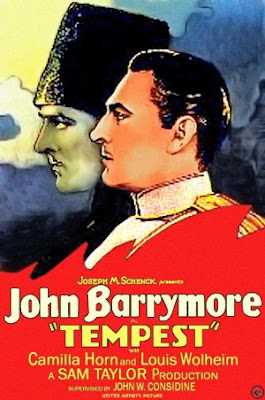 The plot of the film has peasant Barrymore trying to get a commission in the army. Since the upper ranks are full of the aristocracy his ascent is unlikely. Thanks to his friendship with an influential general he gets his commission. However he runs afoul of things when he has several smoldering encounters with a princess that result in him being disciplined and tossed in prison. That doesn’t last long as Barrymore is freed in the revolution and the chance for revenge could very soon be his.

In a film full of pot boiling plot threads and smoldering looks John Barrymore makes it all real. I don’t know how he does it but he manages to make it all seem real even though it’s clearly a grand soap opera.

Watching his silent and some of his lesser known sound films I find that I’ve come to be truly amazed by his talent. How the hell did this guy do this. He never seems to be acting he just seems to be. Even watching some of his later films when he was stone drunk and reading off cue cards its clear that he was in command. I know in some of his Bulldog Drummond appearances he seems to be winking at the audience and in danger of stopping things to ask “can you believe this nonsense?” but at the same time he is very much there and in the moment.

In THE TEMPEST Barrymore was more than just there, he was invested and the result is it’s a quiet understated performance that results in a deeply touching movie.

Worth tracking down.
Posted by Steve Kopian at August 13, 2015