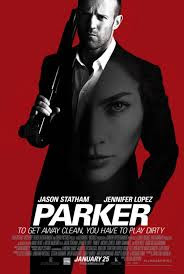 The first film based on a Donald Westlake Parker novel that was allowed to use the characters name. Previously he had been called Porter when played by Mel Gibson in PAYBACK, Walker when played by Lee Marvin in POINT BLANK, Mclain when played by Jim Brown in THE SPLIT, RObert Duvall as Macklin in the OUTFIT and so on. This time out Jason Statham plays Parker as Parker in Taylor Hackford's adaption of FLASHFIRE.

Parker is part of  a crew that robs the Ohio State Fair. When the robbery goes banana shapped and some is killed needlessly Parker decides to walk away from the gang and their half-assed methods. The gang fearing that Park might turn on then set out to kill him but the attempt fails and Parker gets away. Parker vows revenge and heads off to Palm Beach to take down his former "friends" and get his take.

Blood violent and yet frequently funny film is a rather enjoyable popcorn film. Is it up to other Parker adaptions such as PAYBACK, no, but it is an enjoyable film. Though if the sight of graphic acts of violence bother you stay away since there are graphic stabbings,  bloody fights and all sorts of mayhem.

The film falters because it has the feel that it was played with sequences don't quite feel fully formed and there is a sense at times the film didn't know if it wanted to be funny or serious. Its not fatal but it makes the film something that plays better when you don't have to pay for it (say like watching it on cable)

Recommended for a night on the couch.

Apropos of nothing is the thought of someone taking as much damage as Parker does in his various incarnations and still remaining upright.Frankly Parker should have died any number of times along the way and yet he always seems to bounce back seemingly no worse for wear the next time out.
Posted by Steve Kopian at August 21, 2015