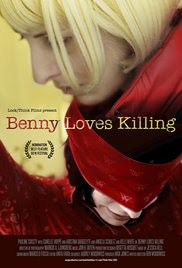 Ex-pat film student living in London decides to forgo the typical route for her film theory class and make a film, Despite her teacher arguing with her that to do so will be an all or nothing proposition Benny decides to do it anyway, she will not follow the pack and her use of horror tropes will allow her to cover everything she needs to because of the flexibility of the genre. Of course things don't go that way and despite her ability to talk some people into things she is a truly adrift in her life with a drug problem, no real home and no real connection to people or reality.

Billed as a horror film, and having traveled the festival circuit over the last four years that way BENNY LOVES KILLING is actually more an uneasy character study. There are no real monsters or terrors except those in Benny's brain. We are claustrophobicly in either Benny's face or head space (some part of her head is in almost every shot) to the point that we are smothered by her and her way of thinking. This is a film where we get into someone else's head for 100 minutes and the effect can be disorienting. What starts off as a look at a person who is't quite wrapped too tight becomes something else as we literally can't look away and come,on some level, to understand her or at least why she thinks as she does.

Beautifully shot and wonderfully acted BENNY LOVES KILLING is a highly polished film technically. Its a film that makes you wish that all inde films could be this well made. Its a film where the technical skill helps boost the mood of the film.

As an entertainment or as a film as a whole I am not sure where I stand. A film with mood to burn the film drags you along for a good chunk of it but somewhere along the way we disconnect and begin to drift off. You begin to realize that the film is not going to tie everything up, or even enough to be full satisfying. If you came into the film thinking it was a horror film you're going to realize that the scares just aren't there.  Its as if they packed everything they needed to make a great film but only put in half the story.

I have seen enough films to know that movies don't need narrative. Indeed some great ones on't have it. Many others bend the way they are told to their own ends. But in every cases where the rules are bent or narrative is thrown away the film stays true from start to finish. You can see the hooks that the director hung everything on from first to last frame. The problem with BENNY is there is this point where you realize that the film isn't going to end but stop- we've gone off the track and are just coasting until we stop moving forward.

It's nothing fatal but the flow of the story keeps this from being a really good film. Right now I'd say it was really good to start and okay over all.

Worth a look for those who love artier films, great performances or films off the beaten track.

Available on VOD services such as Vimeo
Posted by Steve Kopian at May 16, 2016