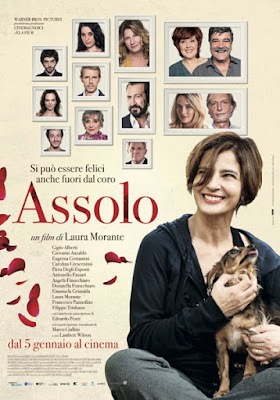 Laura Morante writes, directs and stars in a film as a middle aged woman who clings to everyone, particularly the men in her life. Deciding that she needs to change she sets out to fix her life.

Compared to some of the work of Woody Allen with weird flights of fantasy, the breaking of the 4th wall and dry loopy looks at relationships SOLO is a very funny film. While employing techniques Allen has used, this is in no way a film he would have made. The sense of humor is more crazy and wonderfully unexpected. One of the joys of the film is watching how things play out.Its not that we can't guess where this will all end up, we may be able to, rather there is no way of knowing how we are going to get there. This is not a film or straight lines but meandering curves and side streets. Nothing is quite as we expect it to be and the result is a film that is delightfully refreshing.

I laughed all through this film which is not something I can say about most recent comedies.

An absolute delight for anyone liking loopy comedies.

SOLO plays as part of the Open Roads look at Italian film at Lincoln Center. For tickets and more information go here.
Posted by Steve Kopian at May 31, 2016