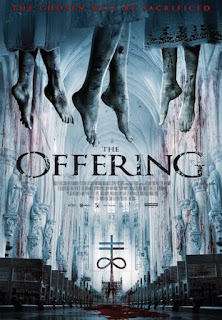 Hitting theaters and VOD this Friday is THE OFFERING a Singapore set horror film.

Jamie is a reporter who receives word that her sister has died. Traveling to Singapore to see what happened she is informed that her sister committed suicide. Unable to believe it she begins digging and finds that her death is some how linked to an ancient evil.  Will she be able to stop the evil and keep her niece safe?

Okay horror film isn't bad, but isn't anything special either. The film suffers from poor staging which seems to think that big open areas are scary. What I mean by this is that much of the film seems to be in large rooms  with lots of empty space. I understand why its being done-to make it appear like no one could be around, but at the same time a lot of it feels like an episode of an architectural show. Worse everything seems too brightly lit, there is no mood or feeling of dread.

To be honest about half way into the film my attention began to wander around. It says a great deal that even with my attention split I stayed to the end, I was interested enough to see where it was going but at the same time I didn't live or die by what happened.

For horror fans worth a look, but it need not be your first choice.