Neil Gaiman: Dream Dangerously is one of the best films of 2016 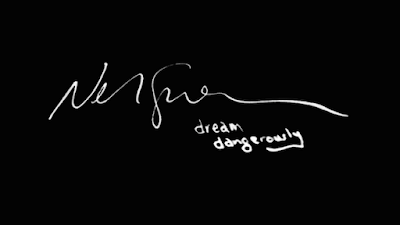 Earlier tonight I saw Patrick Meaney's film NEIL GAIMAN DREAM DANGEROUSLY, there is nothing special in that but a half an hour into seeing the film I emailed Mr Meaney and I said:

When the film was done I emailed him again to say essentially the exact same thing adding that it one of the finest films on creation that I'd ever seen.

I then tweeted that sentiment to the world.

Now I know some of you are going to be saying, "Hey, it's just Steve going overboard on a film" or you're wondering if I'm just trying to to get in good with Mr Meaney. But I assure you that is not the case. It has nothing to do with anything, not even the fact that Unseen contributor Randi Mason is in the film influenced my feelings.

I said that DREAM DANGEROUSLY is great film because it is.

DREAM DANGEROUSLY is nominally the story of Neil Gaiman going on his final large scale book tour. No longer will he be traveling from city to city signing for everyone and on everything put before him. At the end of the months long tour he would be retreating to his home to do the one thing he's always loved to and and always wanted to do, which is "make shit up"

Over the course of the film Neil talks about his life, his work and most interestingly writing. It is not a be all and end all documentary on his life and work (many events are left out, numerous collaborators are not in the film), rather its a peak inside the head and the heart of the man who had delighted and moved millions of people across the globe. Its also a glorious look at how and why we create including the wonderful explanation of the reason "because I have to" that you'll ever see.

Okay, time to come clean. I am not what you would call a fan of Neil Gaiman. I am not one of the "Thingies" as some the first fans called themselves. With Neil I was on the outside looking in, but always aware of what was going on with him and his fandom because of my relationship with Randi. While I have been with Randi when she's seen Neil , I have not ever actually met the man, though I did get his autograph once when I pushed a New York Film Festival Program in front of him at the premiere of PRINCESS MONONOKE. I do not live and die with Neil which is why when I tell you that this film is incredible you should believe me, I have no stake in liking it.

And I really do like it, and then some.

There are a couple of things that I love about the film.

First the film seems to get the real Neil Gaiman, or at least the one I've seen over the years and the one that I've heard about in stories from the people I've talked to who have hung out with him. This is the guy who loves his fans, it witty and funny, and does what he has to do. I love that we get a sense of the man outside of the limelight, not so much directly, rather in the things that are mentioned in passing or stories that are related. No we don't delve into his whole life, we don't meet his kids for example, but we see enough to get a sense of the man away from the cameras.

The other thing I love is that we get a sense of the artist dying to create. Neil explains how and why he writes. We get glimpses into why and how stories came about and why he has always trekked toward the mountain of being a writer instead of taking a safe job. His frequent recounting of writing "because he has to" isn't just words, there is something more, and you feel it in his words. In conversations with people around him, at the signing table, or even with the film crew Neil talks about writing as if it were (and if you write you know it is) a sensual thing. He talks about writing by hand, of using different pens and ink colors so he knows how much he does each day. People talk about him being at parties talking up storms only to disappear for a bit to some corner to get some stray thought down.  If you write because you have to you know that's how the best stuff comes- out of nowhere and at the odd moment.  You must write it down or get it lost. Neil's conversations really let us feel that.

I can't praise director Patrick Meaney enough as to how over the course of the film and its conversations and it's small moments that we see are allowed to see into Neil Gaiman's heart of heart and the place where all the words and magic comes from. Meaney managed somehow to get all the right bits and stitch them together, not into a monster but something beautiful.

Ultimately this is a film about creation. It about how one writes, how stories are created and how Neil Gaiman became Neil Gaiman. It is a film that feels like a Neil Gaiman story.

For me the way the film goes about showing Neil goes about being himself and creating his stories resonated in me. Its a film that I want to how to my friends and yes this is a good portrait of Neil Gaiman, but at the same time if you ever want to know why I do what I do- why I write or why anyone does anything- this will explain it.

As with films I love I am in awe of this film. Here is a film that explained to me why Neil Gaiman has the fans he does while at the same time transcending its subject of a well known author to become something beautifully which explains why we create, This is a film for anyone anywhere who has ever been driven to make good art for whatever reason.

Look for the film to premiere in the next couple of months (I will post details here at Unseen). Also look for an interview with director Patrick Meaney as soon as I finish typing up the questions not to mention another less personal pass by the film.
Posted by Steve Kopian at May 12, 2016