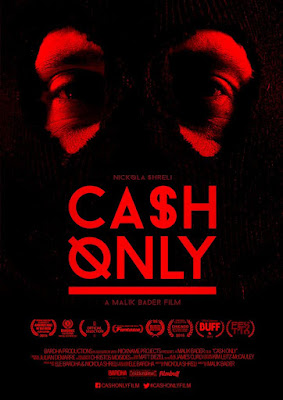 Let me cut to the chase:

CASH ONLY is one of the best crime films you'll see- full stop.

CASH ONLY is one of the best of the so called Neo Noir films ever made.

CASH ONLY is a truly great film.

It blew me away when I saw it at Fantasia last year and I still hold it in very high regard. I loved it so much that when I saw it I had very little to say other than go see it- some films are like that they don't need to be expounded upon they just need to be seen.

Here then is my Fantasia review from last year:

I did not want to see CASH ONLY

I mean I really didn't want to see CASH ONLY.

But I had some time and I figured Fantasia programmed it so how bad could it be?

It's not bad, it's freaking awesome.

All hail director Malik Bader and screenwriter/star Nickola Shreli. They have made one hell of a punch in the face crime drama. This is the sort of film that all the small scale inde crime dramas are shooting to be. This is one of those films that you don't compare it to anything, this is one of those films that in a year or two people will be trying to compare their films to it.

The plot of the film has a guy named Martini trying to make ends meet. He's up to his eye balls with gambling debts, his daughter's school is clamoring for money and the bank wants to foreclose on his rental property, With every one wanting money he finds a stash of money in an apartment he was clearing out. He figures that its his ticket to solvency but instead its a ride to hell as the owner comes looking for it.

Shot with a gritty you are their feel with a star making central performance this is a film that feels lived it. It comes at you like a crazy man with a knife. Its a film that leaves you feeling broken and bruised.

What a fantastic film.

I don't want to say more. the film world premieres tonight and if you're going you're in for something special. If you're not going you have to put this film on your must see list. Trust me I see tons of similar films, most I never review, most I stop half way in, CASH ONLY grabbed me and held me even all the way through the end credits.

You must see it