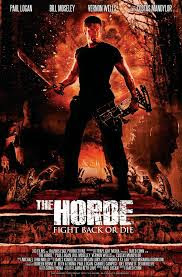 Hitting VOD tomorrow is THE HORDE a wicked little B-horror/action film from director Jared Cohn and writer and star Paul Logan.  The film is a wicked throw back to the grindhouse days of exploitation trash or drive-in gems where you were highly entertained by films that you felt really guilty for loving.

The plot of the film has ex-military man Paul Logan taking a bunch of kids into the woods for a photography trip. Unbeknownst to them the  woods are crawling with an band of blood thirsty crazies who are killing people and getting victims for their leader and his mad scientist underlings.  Of course the crazies attack and Logan has to try and save everyone.

Go get a bowl of popcorn, some beverages of choice and hunker down and watch THE HORDE. Without a doubt you've seen any number of similar films over the years but I'm guessing that it's been ages since you've seen one as engaging, and entertaining as this one. This film knows what it is, knows its cliched and doesn't care one iota, it simply charges straight ahead giving us blood and guts and severed limbs with practical effects and some computer enhancement.

This film is in no way high art. I'm not sure its even low art. It is something all together different,a glorious cinematic bloodbath with some witty lines and lots of severed limbs. I had a grand old time watching the mayhem. As the film played out I really hated myself for enjoying it as much as I did. I mean the film at times is little more than torture porn, but somehow it never falls completely into that category, some how it stays outside it and becomes the sort of thing you pull out when friends come over and you want to see the cinematic equivalent of the gladiator games of old. While its not like a gladiator games it does get the pulse racing with its blood and gore.

I really liked the film a great deal.

Highly recommended to those who like this sort of thing or want a movie to be rowdy with friends with.


Please visit:www.thehordemovie.com and follow @TheHordeMovieTHE HORDE On Demand May 6th, 2016 U.S and Canada
Posted by Steve Kopian at May 05, 2016