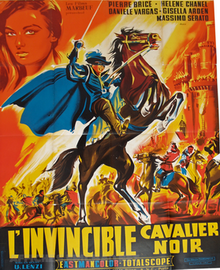 In plague ravaged Spain an evil lord named Don Luis seeks to seize power and he kills the rightful ruler and seizes control of area, and the daughter of his rival who becomes his ward. As he plague marches through the countryside the peasants begin revolting. Things become complicated when a masked rider in the Zorro/Robin Hood mode begins plundering the spoils amassed by Don Luis and killing his men in great numbers.

Off-beat Italian costume drama is a great deal of fun, thanks some twists and turns that are unexpected. For example the film introduces the masked rider in the opening minutes and then completely dispenses with him for the next 25 minutes. When we next see him it’s in his unmasked version and we only know he’s the good guy because he takes flight when the baddies show up. It’s not until he dons his costume that we are sure who he is.

The bad guys are also really bad, with Don Luis doing in everyone and anyone who gets in his way including magistrates who hold sway over him. His henchmen are so sure they won’t get caught they act with impunity, going so far as to try and rape Carmencita, whose father they just killed and who Don Luis is planning on using as a pawn in his power grab.

This is a solid little film. While it isn’t anything you haven’t seen before it scores over other similar films because it is made with a great deal of care. The film looks good, the fights are exciting, the plot moves along and everyone approaches the film with the right level of seriousness. No one is not giving their all. Everyone on all sides of the camera seem to care about what they are doing. No one is walking through whatever they are doing and the film is better for it.

Highly recommended
Posted by Steve Kopian at May 15, 2016