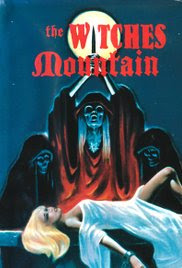 Odd Euro- horror film has a photojournalist and a female writer traveling into the mountains on a story.When they stop at a hotel they are told that a coven of witches occupies the next mountain. Of course they do what they shouldn't and go to the next mountain  and all sorts of problems results.

Weird off beat horror film is your typical off kilter horror film which is more about mood than sense. Its the sort of film where things look weird, people behave oddly and there are twists out of left field, It's a film that I've seen a couple of times (largely because I don't remember I've seen it).  To be honest it's rather mediocre and despite the opening four minutes before the opening credits completely forgettable.

Its the opening four minutes that make the movie, or would if the following 80 minutes didn't wipe them from my mind. Actually the opening is so twisted and so WTF that I'm kind of shocked that no one really talks about it. It's so out there not only because of what happens but also because it's unconnected to the rest of the film.

The opening minutes has a woman come home to find her cat dead. It transpires that the woman's daughter killed the cat because her doll didn't like it.  The mother does what any normal mother would do and sets fire to her daughter. The film then goes to the opening credits and then to the story of the photographer never looking back.

Every time I see it I stare in disbelief- recheck IMDB to find I gave the film a 4 out of 10 and then I try and watch the film to the end but find it's slow weirdness no match for the opening moments.

I don't really recommend the whole film, just the opening minutes which is why I'm posting a link to the film on line here.
Posted by Steve Kopian at May 12, 2016