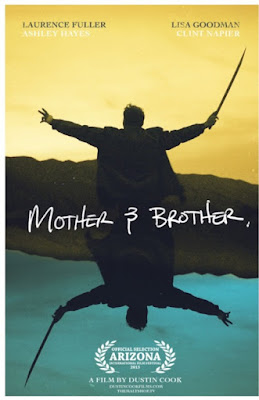 I am horribly remiss. I was sent a link almost year ago for MOTHER & BROTHER and it got lost. In the flood of emails and nonsense the film not only fell to the bottom of the pile it fell out of the drawer and then fell into a crack in the floor boards under the desk. However in cleaning up after this years Tribeca I was purging emails and discovered that I had completely missed the film.

A small gem of a film this short is the story of of two brothers, one out of the house and about to get married and the other caring for their bitch on wheels mother. The mom has no good words for anyone and cuts everyone down and then effectively sets their soul on fire with razor sharp cruelty. The kids take it but the future bride knows she’s bad news and isn’t bothered by the remarks.

The film is a film of looks and silences. Things happens but the more important things are in the moments where nothing seems to. So much is said in the silences as we watch the characters inner lives flash by in their eyes. It’s a stunning and crowning achievement.

The real achievement here is that despite running only 16 minutes the film feels as meaty as a feature. More often than not with shorts- its “oh that was nice. What’s next?” . However here when the film ended I wanted to take a break. I wanted to reflect and ponder. I didn’t want to jump to the next thing. When it was done I was certain I had seen a feature.

Actually when the film was done I wanted to know what happened next. A beautifully self-contained film there is enough here- enough life in the characters and sense of place that this could be made into feature. Frankly I hate shorts that exist to get a feature made-more times than not the shorts are better than the feature-but in this case a feature maybe in order. Here a feature could kick ass and lay the audience out.

MOTHER & BROTHER is a great film. Its one to track down.