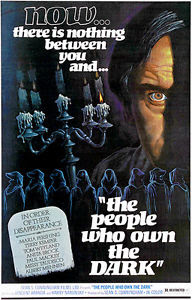 Despite Sean Cunningham's name being attached to the US release in 1980, the legendary director had nothing to do with this film, which is a decidedly off beat apocalyptic tale on the order of the Romero zombie films- except there are no zombies.

On the eve of gathering of a bunch of rich and powerful people in the country several politically connected people get phone calls indicating that the world is potentially on the brink of of war. That doesn't stop the party from happening in a remote castle. As part of the party a secret ceremony takes place in the deep cellar of the castle, however it is interrupted by what seems to be an earthquake. Actually its a war.  When the elite travel into town the the next day to get food they find that the population has become blind. Taking the food in the store they retreat to the castle killing several people in the process. The towns folk decide that payback in order and despite being blind attack the castle.

Really off beat end of the world story is not what you'd expect in a horror film. Very much a film with some heady ideas on it's mind, this is a film that manages to be viscerally scary while saying some interesting things about the class system. One could, and I'm sure some has, done a dissertation on the films politics.

Deep meanings aside this is one hell of a film. While no where near as scary as NIGHT OF THE LIVING DEAD, the film has a genuine frisson as the survivors battle the blind and events don't go as expected even if we can guess the ending.

I really like the film a great deal- though I'm torn as to watching the film again or instead tossing the DVD so I never have to feel that disturbed again.
Posted by Steve Kopian at May 07, 2016