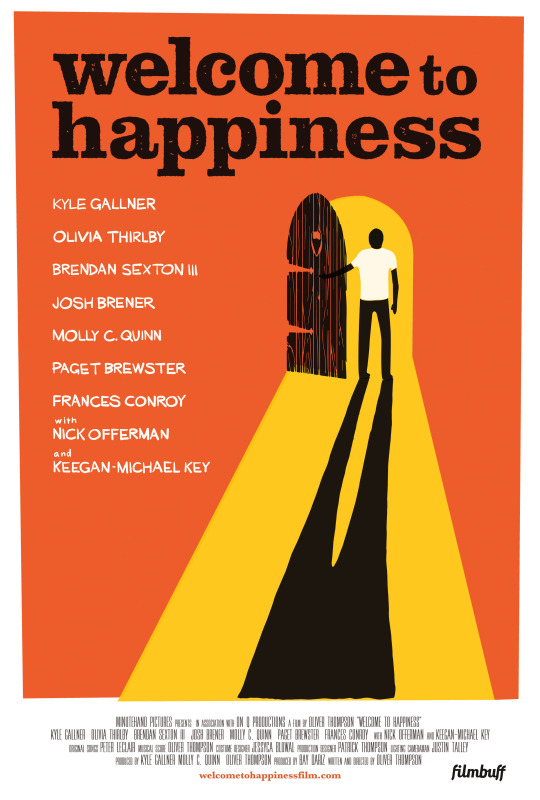 Opening Friday in theaters and VOD is an inde fantasy that is either going to thrill you or annoy you with it's very deliberate pacing.

The plot of the film has a children's book author living in an apartment trying desperately to finish his next book. Periodically an old dot matrix printer down the hall will start printing up a sheet which will be followed by a knock. It seems that this is a precursor to a stranger showing looking to see if they can pass through a door in his closet. With the help of questions from the printer the author must determine if the person in worthy of passing through.  If they are they can go back to some point in their life and correct some past wrong. The trouble is our hero is not allowed to go.

Quirky fantasy film seems to wander all over the place in a desperate attempt to make a film that is uniquely special.  I'm not sure about it being either unique nor special, however it can be entertaining even if it isn't quite clear whats going on.

The problem for me, and the one thing I couldn't really get past was the film was trying much too hard to be something unique. Instead of unfolding in a manner that that  pulled us in and pulled us along because we were curious it was more we were being controlled. It's kind of like  we got a storyteller who started with "Once upon a time in a land far away there lived a prince who didn't like broccoli" and was telling us a constructed story as opposed one that dropped us into the action "The popping sounds were a little too loud for champagne corks which made Nick pull Nora behind the couch as bullets ripped through the windows".

Yes I know that is a completely off the wall analogy, which has nothing to do with the film, but I think it illustrates what bothered me about the film, this is the one about the prince and broccoli where we are hand held along the path and not one about bullets ripping through the windows where we follow along because we want to see what happens next. Its a cinematic fairy tale that keeps us at a distance.For fairy tales or films with magical realism to work you have to be pulled in and made to believe in what is happening, you have to accept with your whole heart what is happening is real. That never really happened here.  It doesn't make it a bad film, it's not, the film is quite good, but it isn't the great one it's striving to be.

Worth a look if you like magical realism, but nothing you need to rush out to see.
Posted by Steve Kopian at May 17, 2016