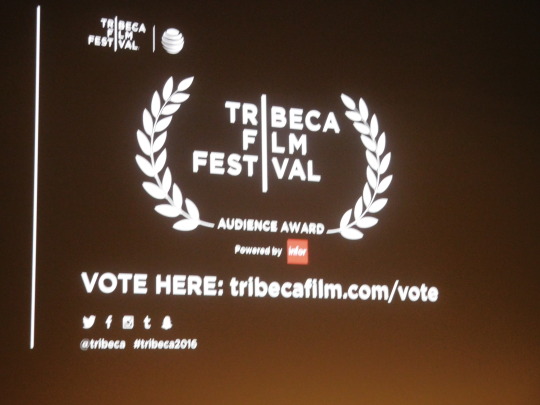 Tribeca has been over for a week. Not that you’d know from the posts here at Unseen since we have been posting like mad since the festival started. Ariela, Roy and myself covered well over 100 films and events.  Its was so many events that we're still working on stuff that may end up dropping over the next week or so.

Now that it’s over its time to take stock. How was it?

That's a question Ariela and I are going to answer in our own ways- first my take:

Tribeca was, as it always is, something different than every other festival. It is unlike any other festival you can go to and no festivals are ever the same thanks to the festival always changing things up in some way.

The truth of the matter this was an okay year. It was not the peak of last year which for me had the high of seeing a reformed Monty Python and a live performance of Rifftrax. Almost nothing was going to top that high water mark for really cool. On its own terms the festival was just okay. I blame it on the film not having enough films that one could get excited about. While most of the films were good, there were very few that were great, or even bad. There is something about a good bad film to get the blood flowing. This year the films just kind of were there.

I have to say a huge thank you to Ariela and Roy for helping with the coverage. I couldn’t have done what we did without them. Besides they are just a blast to hang out with.

And of course any Tribeca isn't worth anything if one doesn't spend time with friends. It was great to hang with, Joe, Hubert, Lesley, Alec, Nate, Nora and Chris. As is the bench mark it was also wonderful to meet the lovely Lauren Humphries-Brooks who is a charmer and one of the founding minds behind the new all milkshake economy. And I love that Randi, John and Bully dropped in for lunch.

As much as it pains me I do have one bone to pick with the festival- they need to change how the audience award is picked. The fact that voting had to be done on line or at a kiosk within 30 minutes of the end of a film caused all sorts of problems. Most people I know had trouble voting. Everyone found they had so much trouble they simply stopped voting. I tried to vote after I saw the Man Who Knew Infinity and found the “kiosks” with lines where people were having problems. I couldn’t find anyone at SVA. A frequent topic of discussion was what was going to win the Audience Awards because no one seemed to be able to vote. The general consensus was that the balloting was going to go to a film that had a tech savy way of stuffing the ballot.

I find the move to electronic balloting curious since one of the best and most important films at the festival was I VOTED which posited that electronic voting is hackable and will not give you a correct result.

I hope next year the festival moves away from high tech for the voting and goes back to paper.

Okay enough of that on to good stuff…

What were my picks of the best films?

My list is split- the best/ favorites and just the ones that touched me. They may not be the best but the touched my heart.

BEST
Memories of the Penitent Heart- A deeply moving film about trying to find answers about our past and realizing that even when you have answers there may not be closure.
Hunt for the Wilderpeople-one of the best films of the year, period. A glorious adventure with two great characters
Obit- It makes you ponder how do you ponder a life
Maurizio Cattelan/Burden - Two artist bios about game changing artists that made you reconsider the artists and their art
Tickling Giants- Its one thing to say that we want to have free speech but would we risk death to make a joke?
Mr Church- Get past the heart on it's sleeve telling and you have Eddie Murphy giving a deeply touching performance in a moving film
Curmudgeons- Danny DeVito's best film is about being at the end of your life and still trying to find happiness. Just great
I Voted?- Electronic voting machines are bad- here's why- and if we don't listen we're going to be doomed as a democracy

FAVORITES
Courted- Charming romance/character study. What the hell- its real people on screen.
Reset- What happens when the Paris Opera Ballet brings in a guy who shakes everything up? A love letter to having fun when creating
Pistol Shrimps- one of the funniest films at Tribeca hurt me. I loved it


And now Ariela has her say

I saw 22 movies at the Tribeca Film Festival, beating my record from last year, which I believe was 14 movies. I had a great time! I always planned to see 3, sometimes 4 movies a day, but I soon realized that 2 was my limit, especially with the nice weather outside. I would go outside between movies, and wasn't able to talk myself into going back in. Last year, I remember seeing so so many movies that I loved and recommended to people. It was one great movie after another. This year I felt that I saw a lot of meh so so movies. There were a lot of movies I missed out on and wonder if I missed all the better ones, or was last year just better? Hopefully the ones I missed come out at some point and I'll find out.

Anyways, most of my favorite movies were documentaries. My favorite movie BY FAR was Hunt for the Wilderpeople. I can't say enough good things about it. I loved it so so much that I saw it a second time. Just such a great film. I've been told by 2 friends that Taika Waititi's (the director) other films are equally as great, I'll have to check them out.

Non documentaries that I recommend aside from Hunt for the Wilderpeople