The Amazing World of Ghosts is one of the more out there paranormal/speculative documentaries to come out of the 1970’s. Where most of the films that filled theaters during the mini wave of similar films that allowed Sunn Classics to churn out product have a point such as bigfoot or UFOs are real, Amazing World seems to be about just about anything other than ghosts.

How do I describe this film? 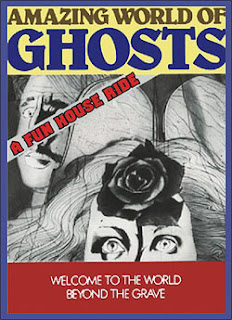 I think the easiest way to describe the film is as a stream of consciousness monologue about everything. The largely nonstop narration covers all sorts of speculative and philosophical subjects, jumping from thing to thing frequently without connection, how else to you go from the opening which talks about a boy walking in a city at night, to ghosts, to a trip to Jupiter to ghost photos to notions of the afterlife to the structure of the universe to I don’t know what.

And when I say I don’t know I really don’t.

I’ve seen the film several times in rapid succession trying to work out why and how it pings from thing to thing I can’t figure it out why and how it does what it does- it just does. It’s so bizarre that the first time I saw it I went from groaning at what starts off as a pretentious muddle to watching it because it almost makes sense to realizing it doesn’t and becoming absolutely fascinated with the strangeness. It’s a film that you want to talk back to but can’t because the narration never stops and there is just enough here that makes sense that you shut up because you want to hear what they are saying- even after the third or fourth or ninth time through. This would be the ultimate riffable film except there is no place to riff- there are almost no pauses.

I recently showed the film to a friend I had mentioned it to and he went from talking through the first five minutes to just staring at the screen and occasionally mumbling something. When it was done, he turned to me and said “what the hell was that?”

My question exactly- what the hell is this thing? I don’t know. I don’t think it’s a good film, but at the same time it’s such a mess that you can’t help but react to it.

For anyone wanting to experience a truly psychotronic film- this is it.
Posted by Steve Kopian at May 14, 2016