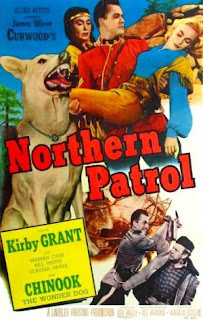 One of the better films in the Kirby Grant and Chinook series is also one of the last ones. in the series.

The film begins with Grant heading heading home on vacation. Stopping at a cabin he finds what appears to be an apparent suicide. The troubling thing is the man killed himself in the middle of making breakfast. The suicide was obviously murder. Grant dives into the investigation and instantly realizes that something was up with the brother of the man's fiance. Things get worse from there.

Solid adventure film holds our attention thanks to a complicated plot involving a good number of characters. This isn't simply a small group of people circling each other, rather characters show up and add to what Kirby knows. Additionally there are a couple of unexpected twists. It keeps things moving and interesting in more than a by the numbers way.

One of my favorite films in the series.
Posted by Steve Kopian at May 21, 2016