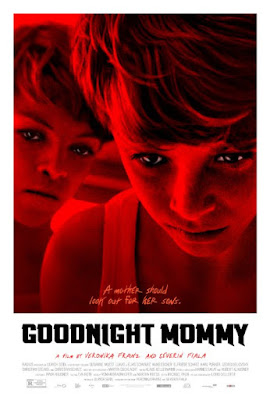 I’m at a loss to explain why Goodnight Mommy was the Austrian submission for the Oscars. Actually I’m not quite sure why it’s gotten as much play and love from the critical community as it has since it’s little more than a run of the mill exploitation film or one of M Night Shamalamadingdong’s trick films warmed up with art house pretentions.

The plot of the film has twin boys pondering if the woman in the bandages is really their mother since she is behaving strangely and keeps doing things that their real mom wouldn’t do. Of course the whole thing has a twist and it ends badly for everyone.

If you’re a fan of horror movies or thrillers there is a good chance you’ve seen a version of this film before. I could give you a list of five films off the top of my head which would tell you instantly where the film was going and if I thought about it for a bit longer I could tell you more but I’m not going to mention any titles since I don’t want to give it away. To be honest the film isn’t bad, it’s just not even remotely anything that any movie fan hasn’t seen before.

The difference here is that instead of being a low budget gritty telling this time it’s in an upscale house that looks kind of antiseptic. The filmmakers are going for a sense of a world of their own making feel and it kind of works to a point but after a while it just feels arty for arty’s sake. The film’s dialog is frequently obtuse. Instead of being daring and having everyone talk normally there are times when what we see is obtuse for no real reason except to try and hide what is going on. It’s so off that it doesn’t really pull the audience in as make you wonder what is really going on. I was listening to the dialog not so much for the drama but for clues as to what the real deal was.

In talking to a number of people about the film before I saw it everyone mentioned a point where the film flips. They never said what the flip was but everyone said there was a moment where you either accepted what transpires after that or you turn off. I was kind of left cold by the flip and what follows. To me it seemed to be an effort to bring some tension to a film that really didn’t have any.

I think it’s not so much a question as to why the film has gotten so much love, rather it’s a question of haven’t the critics who have been touting it seen the other similar films?
Posted by Steve Kopian at May 06, 2016