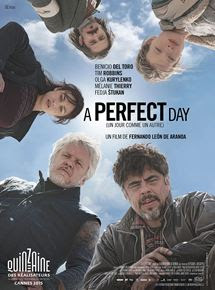 This is the story of a group of aid workers in an unnamed Balkan country at war. The conflict is winding down and the UN sees the end of the road, but that doesn’t mean there is isn’t work to do. A group of aid workers headed by Benicio Del Toro has to get a body out of a well before it contaminates the drinking water, however they rope they have breaks before they can get the poor guy out and the poor guy drops back into the water. As they head off to get rope things happen such as picking up a boy who’s being bullied by a group of older kids who want his ball… And so it goes as the lives of the aid workers spin out over roughly 36 hours.

This is a very good small scale comedy drama that is carried along not so much by it's plot but by the cast. To be certain the story is involving , but the real joy is simply watching everyone interact.  It's especially nice to realize Olga Kurylenko is a much better actress than some her genre appearances would lead you to believe her to be.
Posted by Steve Kopian at May 09, 2016