Friday night I went to see one program at the Bosnian Herzegovinian Film Festival in New York. The original plan was to attend the whole thing but I didn't think what weekend this was so I forgot I had conflicts. (I'm still working on getting reviews up for all of the features.)

Before the film I met up with Joe Bendel and his mother. She's a lovely woman and great fun to talk to.

The evenings program began with the short LIONHEART. The film is the story of a woman who took a job at  hotel thinking she would be working in the kitchen. Instead she ended up a sex worker who tried to kill herself and only got free when she agreed to marry a man who bought her freedom, though even then she ended up in an abusive relationship.

The film is a matter of fact telling of her life supplemented by stories from two officials who explain the cultural background of  why it happened and the sex trade. Its a punch in the face and as the film goes on you feel waited down by the story. Its a really good film that doesn't go for shock and awe but bowls you over with its quiet power 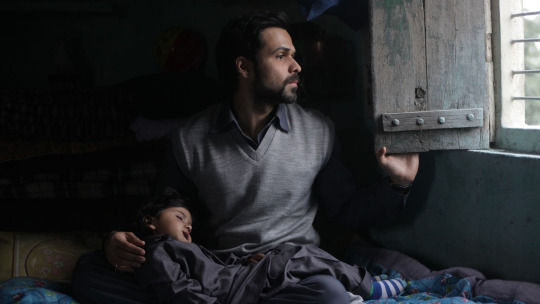 The short was paired with Danis Tanovic's TIGERS from 2014. Tanovich's NO MAN'S LAND won the Oscar in 2001 and rattled cages.  That his TIGERS has not been seen in the US until now suggests that its crushing power, which is directed full bore at Nestle and other makers of infant formula, is something the companies in the cross-hairs don't want seen.

TIGERS tells the story of Ayan, a stand in for whistleblower Syed Aamir Raza whose life story is pretty much what we see on screen. A film crew is attempting to ascertain how true his story is. They want to tell his story but want to know if they are going to be sued into the stone age. After debating if they can use the real company name (the real life Nestle which is seen fleetingly) they decide against it and change the name and then Ayan tells his story.

Ayan was a pharmaceutical salesman  who wasn't having luck selling locally made drugs because everyone wanted those from the Western multinationals. Seeing an ad to work for just such a multinational he talks his way into getting hired. The product is baby formula and Ayan is one of the best salesmen. Several years in he discovers that the formula is killing children. Poor parents are cutting the formula with impure water to make it go farther and its causing children to die from dehydration, a problem the company had been aware of for decades. He quits and decides to blow the whistle but the road is dangerous.

Tanovic has made a film that manages to over come some uneven performances and a couple of bumps to be a film that will rock your world.

And I mean it will rock your f-ing world.

It has been ages, since I've seen a film where when the film ended no one moved. No one spoke, No one did anything except stare at the screen shell shocked. When it was done and the lights came up every one got up and silently walked to the exit and the street. No one talked until they hit the doors to the street. Joe, his mom and I just sort of staggered to the subway

While most certainly a narrative and a messy polemic, the film is also a kind of straight on documentary. These things happened and are happening, the statement at the end that the film contains footage of dying children from when the film was shot in 2013 produced an audible creak in the theater as if the whole audience shifted in their seats in absolute horror.

It is not a lie to say that seeing TIGERS was one of the most powerful cinematic experiences of my life. It may not be conventionally one of the best films ever made but is one of the most ass kicking. It's a poke in the eye and a boot on the throat and a quiet whisper in your ear "Children are dying what are you going to do about it?"

If you need to know why BHFF is one of the best kept secrets in NYC its because a film like TIGERS or any of the other films will screen, blow its audience away, and unfairly barely register on the rest of the film world in New York. Next year you all have to go to the festival- you will thank me.
Posted by Steve Kopian at May 29, 2016