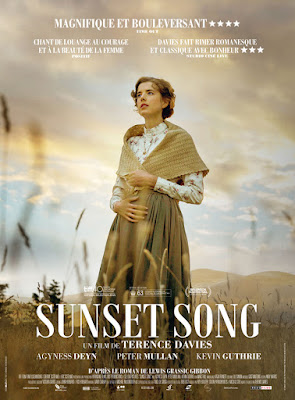 Terence Davies extremely pretentious and extremely silly film really needs to be seen either with the Riff Trax guys or with friends and beers, because you will be talking back at the screen.

I know I kind of reviewed this film when it played Film Comment Selects, but this is a film that needs to be kicked while it's down.

A beautiful to look at film with some great performances is wrecked by a script that is so incredibly full of self importance that you won't believe that a filmmaker of Davies's stature had a hand in it.

The plot follows Chris Guthrie from her days as a teenager studying to be a teacher in the years before the First World War on to some time during the conflict. We watch has her beast of a father drives off or drives to suicide her family and how after her death she finds and marries the man of her dreams only to find tragedy with the war.

A long pained film that doesn't explain a whole hell of a lot (the time frame will make you go what the f---? Such as the growth of the baby) and requires you to just sort of accept it. I was shaking my head all through the press screening back in February and I was muttering under my breath.

There are some really WTF things in this film, beginning with Chris' father who is an absolute animal. He beats the living shit out of one son to the point he runs off to get away. His treatment of the others is so bad  his wife poisons herself and her babies because his latest rape of her has resulted in another pregnancy. His sister insists that she take two of the sons with her partly because she wants kids of her own but mostly to get them out of her brother's line of fire. His behavior is is over the top and insane that when he asks in all seriousness why one son left home the audience roared with laughter (it was not supposed to be funny). The character is absolutely badly written as to be a cartoon.

The other major plot problem involves the sequences when Ewen returns from the war.  After Chris says something about her husband coming home he shows up and instead of being the loving person he is a monster intent on raping his wife. After a couple of days of this She pulls a knife and he leaves. We don't know why he acts this way or where he's going. Then suddenly she gets a telegram saying Ewan was killed in the war...and then it flips and we find out that Ewen had deserted to see Chris because he loved her, but that he behaved badly because she didn't kiss him when he left to go off to war- no really. This is all revealed in a flashback to Ewen relating it to a friend before he's executed.

Ludicrous doesn't even begin to describe it.

The whole sequence is so badly handled that what should have been touching is laughable and the final shot-  a bag piper playing at sunset for the dead just lies there. The final turn is so WTF it had even the press people for the film trying to work it out after the screening.

This film is just a mess.

It opens today and is not recommended.
Posted by Steve Kopian at May 13, 2016