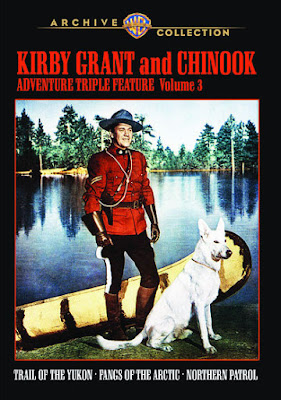 Despite being set in the Yukon territory TRAIL OF THE YUKON is a full on western. If you changed the men’s hats, replaced talk of the Mounties with US Marshalls and removed the snow this film would become a western without anyone noticing. It has a plot that is so by rote that I’m guessing that the story was moved north of the border just to make it stand out. Its so by rote that you kind of wonder how this spawned a series that last eight more films,

TRAIL OF THE YUKON is not a bad film, not by a long shot, it’s just not that outstanding. Watching the other films in the series you know why the series went on, Kirby Grant had a real character and the films are lifted by a force of personality. I suspect that’s because the other films were set up to be about Grant and his dog, this film is telling a wider story.

The story here has a group of men robbing the local bank. After fleeing into the wilderness the group is double crossed by traitors in their midst and the money is stolen again. This results in a running gun battle in canoes. One of the double crossed men gets away with the money while the traitors go off after him. An injury brings Grant and Chinook into the mix as everyone tries to figure out who the real bad guy is.

As I said this isn’t a bad film. It’s very entertaining on its own terms but it suffers from being too similar to a couple other hundred films. Worse in this film the character Grant is given to play is way too similar to other characters. They look alike, the sound alike and if you aren’t pay attention you’re going to wonder who is who. I did.

TRAIL is a very good film on it’s own terms, and recommended to anyone wanting to see a good film, especially to fans of the Kirby and Chinook series which started here. The film is now out on a triple feature disc from the Warner Archive
Posted by Steve Kopian at May 19, 2016